NFL round-up: Bills have a quarterback diamond in Josh Allen 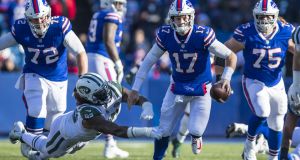 Perhaps going unnoticed this weekend was a battle of two of the NFL’s top rookie quarterbacks, Sam Darnold of the New York Jets and Josh Allen of the Buffalo Bills.

Drafted third and seventh, respectively, in the 2018 NFL Draft, both young quarterbacks have displayed inexperience this season, as the pair rank towards the bottom of the NFL in most passing categories and have led their teams to uninspiring 4-9 records (both teams are tied for last place in the AFC East).

Although Darnold’s Jets captured the 27-23 victory over Allen’s Bills on Sunday, Buffalo fans may have more to look forward to when it comes to quarterback play in the long run.

Possessing rare size and strength at the position, Allen has the prototypical build of an NFL quarterback. His arm strength - which many pundits consider the best in the NFL - was rightly praised by scouts coming into the NFL draft.

While Allen’s decision making has been called into question throughout the season, he has proven he can make throws only a handful of players in NFL history could make, and he is beginning to do so with more regularity.

What perhaps flew under the radar in the evaluations of Allen, however, is how the quarterback’s athleticism would translate into elite rushing abilities.

Over the past three matches, Allen has rushed for 335 yards, good for first in the NFL among quarterbacks.

Allen has finished with more than 90 rushing yards in each of last the three matches, making him just the second quarterback in NFL history to top 90 yards rushing in three consecutive games (Packers quarterback Tobin Rote accomplished the feat in 1951).

In Sunday’s match against the Jets, Allen finished with a game-high 101 yards rushing and a touchdown on nine carries. He also threw for 206 yards passing but tossed two interceptions with only a 50 per cent completion percentage.

Coming out of Wyoming, the biggest knock against Allen was his arm accuracy, but the Bills always knew 2018 would be more of training season for the quarterback, who wasn’t privy to elite coaching in college.

While Ravens quarterback Lamar Jackson has (deservedly) received the most hype this season when it comes to quarterback mobility, Allen’s newfound rushing skills offer him a higher ceiling than the elusive but flawed Baltimore quarterback.

Beyond moving the ball down the field, Allen’s ability to scramble out of the pocket and extend plays helps the team’s passing attack by opening up the play-action pass and forcing extra defenders to account for Allen at all times (thus freeing receivers from double coverage).

If Allen can harness his arm strength through offseason training, he could become one of the NFL’s most interesting quarterbacks to watch in 2019. And if he continues to develop at the rate he is going, Buffalo could have their first superstar at the position since Jim Kelly took the team to four straight Super Bowls in the 1990s.

While there are a lot of “ifs” in projecting Allen’s future success, Bills fans should be encouraged that this season has been more boom than bust for the new face of the franchise.

Bursting through the left side of the offensive line, Titans running back Derrick Henry snapped out of a season-long slump with a 99-yard touchdown run, tying former Broncos running back Tony Dorsett for the longest rush in NFL history. The touchdown trot was reminiscent of Marshawn Lynch’s 2010 “beast mode” run, as Henry bounced through defenders and stiff-armed three Jaguars en route to the score.

The most interesting thing about the play, however, was that it almost didn’t happen. The Titans originally called a quarterback sneak, but Marcus Mariota switched the play before the snap to give Henry the chance at history.

The match ended on the most prolific last-second play the league has seen this season, as three unlikely laterals propelled the Dolphins to victory and kept the Patriots - at least temporarily - from capturing their 10thconsecutive AFC East title.

Trailing 33-28 with 16 seconds to play, Dolphins quarterback Ryan Tannehill threw a 14-yard pass to Kenny Stills, who lateraled to Devante Parker. Parker then tossed the ball back to running back Kenyan Drake, who ran up the field and evaded two Patriots en route to the match-winning 69-yard score as time expired.

In sum, the match saw nine lead changes, two of which came during the fourth quarter. Tannehill completed 74 per cent of his passes on the afternoon, finishing with 265 yards and three passing touchdowns.

The victory moved Miami to 7-6 and kept the team firmly entrenched in the AFC play-off hunt, tied with the Ravens and Colts for the second AFC Wild Card spot. The Patriots will have another chance to clinch the AFC East next week as they travel to Pittsburgh to take on the Steelers.

The Chargers (10-3) travel to Kansas City (11-2) with play-off home field advantage in the AFC on the line. The winner of the match will likely carry the advantage throughout the AFC play-offs, so expect both teams to come out firing. The match will also pit an excellent Chargers defence against Kansas City’s historically great attack.

IRFU hopes to open contract negotiations with players in January 14:56
Pauw: Delay in Ireland’s Covid-19 test results compared to Germany is ‘unfair’ 12:55
Full 36-player panels to be allowed at intercounty matches under Level 3 12:46
Women’s Rugby World Cup to be expanded to 16 teams from 2025 12:03
Joe Canning discharged from hospital on Sunday night 11:45