Higgins pulled off greatest escape act in 1983. It was the beginning of the end 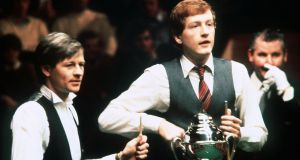 Alex Higgins came from seven frames behind in the first session to win 16-15 in December 1983. Photograph: Mirrorpix/Getty Images

Alex Higgins’s life was in a state of turbulence in late 1983. First-round defeats in the International Open and Professional Players Championship showed his struggles on the green baize, and his domestic situation was tumultuous to say the least. He had spent some time in a mental-health hospital after he overdosed on sleeping tablets while on holiday in Majorca and, now separated from his wife, Lynn, his life seemed to be spinning out of control.

Higgins had reached the final of the UK Championship the previous season but, judging by his form, the chances of a repeat in November 1983 seemed slim. However, predicting anything with the Hurricane was never straightforward. Going into the tournament, he said he was practising for 10 hours a day, so perhaps he would be able to make his mark at the Guild Hall in Preston. Higgins had already won the World Championship in 1972 and 1982, as well as the Masters in 1978 and 1981, so a victory in the UK Championship would make him just the third player – after Steve Davis and Terry Griffiths – to win snooker’s triple crown.

He had the motivation and the pedigree but Higgins began the tournament terribly, with another early exit looking a distinct possibility when he lost the first four frames of his first-round match to Murdo MacLeod. Yet a fine comeback resulted in a 9-6 win and, as the tournament progressed, Higgins began to gain momentum. A 9-1 win over Paul Medati and a 9-5 victory against Tony Knowles set up a semi-final meeting with Griffiths.

Higgins announced that he was back with his wife during the Griffiths match and his improved mental state was reflected in his impressive 9-4 win. He played a rock-steady safety game when needed and then turned on the flair to capitalise on Griffiths’s errors. Having lost two previous UK Championship finals, Higgins was now hoping it would be third time lucky.

Inevitably, he would face Davis in the final. The reigning world champion had little trouble in Preston, losing just 12 frames in four matches as he brushed aside Geoff Foulds, Willie Thorne, Tony Meo and Jimmy White. But Davis knew that a focused Higgins would be a different proposition. “If he plays as well as he has been, I shall have to step up a gear,” said Davis.

The early exchanges of the final suggested the Higgins juggernaut was coming to a juddering halt. In what looked like becoming a huge anti-climax, Davis flew out of the traps and took all seven frames in the first session on the Saturday. With sponsors Coral quoting odds of 16/1 for Higgins to win the best-of-31 final, the Hurricane was in need of inspiration.

Golfer Andrew “Chubby” Chandler, one of his close friends, came to the rescue after that disastrous first session. “I made sure he went back to the hotel, that he had a meal and that we talked about everything under the sun except snooker,” said Chandler. “I think he now realises which approach is more beneficial. I can’t tell him how to win snooker matches in terms of skill, but I do understand the mental process.”

Higgins returned to the table a changed man. Winning the opening three frames of the evening session was the ideal riposte and, although Davis won the next, Higgins took the last four frames on the Saturday to leave the final in the balance with Davis 8-7 in front. The final everyone had hoped for was now a reality. Davis was rattled, as he later admitted. “When I was leading 7-0 I was flying, but he changed his mood and was trying desperately to get back into the game. I never really recovered once he did.”

Higgins continued his fine run on the Sunday, winning the opening frame to level the match at 8-8 as the final slowly developed into an epic. The match swayed one way and then the other as Davis took a couple of frames and then Higgins pinned him back. With just the Sunday evening session to play, they were tied on 11-11.

The two great snooker heavyweights continued to trade blows in the final session as the the 1,200 sell-out crowd and BBC audience at home remained on the edge of their seats. Remarkably, Higgins took the lead for the first time when he closed out the 23rd frame. When he hit a break of 86 in the 26th – the highest in the final – Higgins was 14-12 up and on the brink of a miracle.

A lot of players may well have drowned as the relentless Higgins wave crashed towards them, but Davis was no ordinary mortal. The reigning world champion won the next three frames on the bounce to put himself one up with two to play. Higgins was on the ropes once again.

Digging deep, Higgins sent the match into a deciding frame before completing “the greatest escape act snooker has seen” to quote David Emery of the Daily Express. Taking the clinching frame 77-0, Higgins was immediately congratulated by plenty of well-wishers. “It was very important to me to beat Steve to show the public how good I am,” he said afterwards. “The outcome is a very happy ending. I owe much to my good lady for the help and encouragement she gave me.”

Davis tried his best to put on a brave face but struggled to hide his disappointment. “I enjoyed it as a game,” he said. “It was good for snooker. The only person it wasn’t good for was me.” Understandably, the defeat hit him hard.

Higgins would wrote in his autobiography, From the Eye of the Hurricane: “I remember looking across at Steve during the presentation and thinking he looked like a little boy lost.”

Everything slotted into place perfectly for Higgins. “This is the best week of my life,” he said as he stood with his wife. “We’re back together, it’s my daughter’s birthday and I’m the UK champion. What can beat that?”

It could have been the start of something big but, as Higgins recounted in his autobiography, his triumph at the UK Championship was in fact the beginning of the end. “I knew I had triumphed in one of the greatest comebacks in snooker history. I was back on top and nothing was going to get in my way. How wrong I was.” Sadly, it wouldn’t be too long before his career and marriage were both beyond repair.

But that was in the future. Higgins’s performance in that 1983 final deserves to be celebrated in isolation, a frightening achievement considering the man he was up against. “It’s one of the most enthralling finals ever,” Higgins said that Sunday night. “Everybody saw two master craftsman at work.”

Spare a thought, though, for Bill Martin of Millwall. Staking his life’s savings on a Davis win at 4/6, Martin must have been counting his winnings after the first session of that final. But you had to expect the unexpected when dealing with the Hurricane. – Guardian