Sky to end its involvement in cycling in 2019 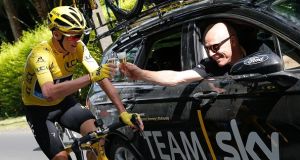 Team Sky will cease to exist at the end of next year after Sky announced that it will end its involvement in professional cycling at the end of 2019.

The news, which was broken to stunned riders and staff over dinner at their training camp in Mallorca on Tuesday night, draws to an end more than a decade of success during which the team won six Tour de France yellow jerseys as the Giro D’Italia and Vuelta a Espana – along with 52 other stage races and 25 one-day races.

Team Sky’s principal Dave Brailsford paid tribute to his team and said he hoped that a new sponsor would be found for the 2020 season. However, with Sky having investement more than £150m over the last 10 years - making Team Sky comfortably the richest outfit in world cycling - it remains to be seen whether a viable buyer can be found.

“While Sky will be moving on at the end of next year, the team is open minded about the future and the potential of working with a new partner, should the right opportunity present itself,” said Brailsford. “For now, I would like to thank all Team Sky riders and staff, past and present – and above all the fans who have supported us on this adventure.

“We aren’t finished yet by any means. There is another exciting year of racing ahead of us and we will be doing everything we can to deliver more Team Sky success in 2019.”

Brailsford also paid tribute to his team, which began in 2010 with the goal of getting a British rider to win the Tour de France for the first time – a target that was accomplished when Bradley Wiggins took the yellow jersey in 2012 – and said he was proud of the team’s part in inspiring nearly two million people to cycle regularly.

“The vision for Team Sky began with the ambition to build a clean, winning team around a core of British riders and staff,” he said. “The team’s success has been the result of the talent, dedication and hard work of a remarkable group of people who have constantly challenged themselves to scale new heights of performance. None of this would have been possible without Sky. We are proud of the part we have played in Britain’s transformation into a cycling nation over the last decade.”

Sky executives are understood to have told Brailsford that with Concast’s recent £30bn takeover of Sky in September it was the natural time to end the partnership. But their decision may have also be influence by a number of controversies the team has faced – especially a damning report by the Digital Culture Media and Sport select committee in March, which looked into a Jiffy bag delivered to Wiggins in 2011. The report created waves of negative headlines when it concluded that Team Sky had cynically abused the anti-doping system by using therapeutic use exemption certificates to allow the administration of the performance-enhancing drug triamcinolone. It also concluded that such practices were “inconsistent with their original aim of “winning clean” and maintaining the highest ethical standards within their sport.

However, Team Sky have always rejected any suggestion of widespread triamcinolone use by their riders ahead of the 2012 Tour de France, while Wiggins has always denied he has used any drugs. Chris Froome, who become the first rider to hold all three grand tour winners’ jerseys at the same time earlier this year, also had an adverse analytical finding of salbutamol in 2017. However, he was later cleared by the UCI.

In a statement Sky said it would now focus on other projects, such as its most recent flagship campaign, Sky Ocean Rescue, which is raising awareness about ocean health and encouraging businesses and the public to eliminate single-use plastic. Jeremy Darroch, Sky’s Group Chief Executive, said: “We came into cycling with the aim of using elite success to inspire greater participation at all levels. After more than a decade of involvement, I couldn’t be prouder of what we’ve achieved with Team Sky and our long-standing partners at British Cycling.

“But the end of 2019 is the right time for us to move on as we open a new chapter in Sky’s story and turn our focus to different initiatives including our Sky Ocean Rescue campaign. I’d like to pay a special tribute to Dave Brailsford and the immensely talented team of riders and staff he has assembled at Team Sky. What they have achieved together would have been beyond the dreams of many just a few years ago. We thank you for joining with us on this journey and look forward to enjoying our last season of racing together.”

Meanwhile, a Team Sky spokesman told the Guardian that everyone involved in the team was determined to end the association with Sky with a bang. “The message is very much that it is business as usual for the 2019 season,” he added.