Joanne O’Riordan: It’s encouraging when the focus of sport is on having fun 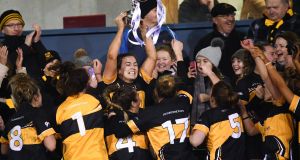 From the bitter beginnings when Cork’s Mourneabbey clawed their way from the harsh surroundings of junior football all the way to the summit of Parnell Park, it was an absolute joy and a sight to behold as Bríd O’ Sullivan lifted the Dolores Tyrrell Memorial Cup, etching Mourneabbey’s name into the history books.

It took them four attempts to lift the trophy for the first time in their history, with each defeat leaving a sourer taste in the mouth. You could see the relief and pure joy etched on the players’ faces at the full-time whistle, and Mourneabbey had created new heroes and new legacies for generations to come.

For me it gave me the spark I needed to head to Roscommon for a pre-booked event for their underage intercounty teams for girls. Talking to some managers, coaches and development officers, a lot of topics came up for discussion, such as the Cork years of dominance in ladies football and underage coaching. One word stuck firm in my mind – fun.

The core of any successful underage team is creating an environment of pure fun and establishing social relationships that can last a lifetime.

It struck a bell as I flashed back to a conversation with a club team in Cork City about the rise in girls of around eight or nine years of age picking up a hurley, a football or now a hockey stick. In fact, the playing field was half and half – there were as many girls and boys playing for this particular club in Cork City.

And there was one thing that we all agreed on throughout my various conversations across the country. The kids are all incredibly excited to start at eight or nine or even younger, but for girls’ teams the talent retention begins to slip once they hit their teens.

I know a lot of it is due to the lack of role models and how if you can’t see you can’t be. But there is so much more than that.

Some girls don’t want to play sports because it isn’t cool, it is a thing boys do, and having muscles and being fit is not the standard of beauty. This isn’t a column trashing beauty standards, this is just what I’m told when I talk to girls at school level or in a sporting environment. This is what I experienced when I was 14 and 15.

A vast majority of my female friends don’t like sports, which is fine. Yet there is a part of me that wonders if PE wasn’t so centred on knocking a ball about and segregating boys and girls what would have happened.

As the celebrations were beginning in Mourneabbey and as the bonfires were being lit, I sat in a Roscommon room where I listened to development officers discuss the future for the girls’ games. The minors had won an All-Ireland, and the U-14s and U-16s knew the pathway that was ahead. Yet still the focus was on having fun, making friends and team spirit.

Genuinely, it was encouraging to hear. There was no pressure on anyone, no guns to anyone’s head to get them to commit to a life sentence playing football for Roscommon.

The girls were encouraged to go out, do their best, and if their best was an All-Ireland then fantastic, but if not there’s stuff to build on for the following year.

And the girls bought into that. They bought into that team spirit and camaraderie. It was refreshing, and came at a time when people are taking things outrageously seriously, from work to life to sport.

The girls afterwards told me they were raring to go, and ready to hit pre-season hard. Some lamented about training in the winter, but they were seriously looking forward to being reunited with their friends. They were most looking forward to building on a future and platform to bring success to Roscommon.

Now that we have launched all movements necessary to bring girls into sport, now we must fully acknowledge that retaining the newly-recruited female talent is vital.

Everyone is motivated differently, and everyone in life has different aspirations and goals. What everyone involved in women in sport must now do is lay the foundations to keep the new talent.

Of course, fighting for role models to be seen and equal access is essential in this, but there are also fundamental issues. Like making sport fun, creating good environments for those to prosper and facilitating everyone’s needs, from the intercounty or international star to the girl who shows up to training daily to keep the numbers up.

We must ensure that everyone has an equal playing opportunity because all the other efforts to keep women in sport will be in vain if we don’t have the emerging talent at ground level.