Denise O’Sullivan taking centre stage in US with Courage 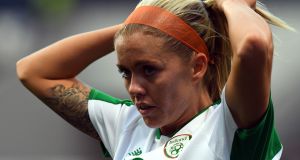 NC Courage’s Irish player Denise O’Sullivan has shone for the US club since joining them. Photograph: Getty Images

The National Women’s Soccer League in America is full of stars and has lots of glitz and glamour. Deemed the best league in the world by many, there are few women’s leagues that can boast the depth of talent, excitement and pure strength the NWSL has. And, despite Irish soccer being deemed as one the less glamorous leagues with some of the scrappiest football, one midfield maestro from Cork is shining brighter than ever before.

So, a trip to the big leagues beckoned and the Dash, the women’s soccer part of the Houston Dynamo, decided O’Sullivan was good enough to start next to former Fifa Player of the Year and two-time World Cup winner, Carli Lloyd.

The problem with the Dash? After years of mismanagement and an inability to have a solid backline resulting in bad defeats, the Dash and O’Sullivan found themselves in a bitter dispute, resulting in O’Sullivan being frozen out and left on the sidelines. Her typically stellar performances with the women’s national team also became infrequent.

O’Sullivan had few options in a sport that provides minimal opportunities. Her next best one was a move to Germany to play in a league that had a higher technical ability. And then, with a bit of luck, one phone call from North Carolina Courage coach Paul Riley changed her whole career.

North Carolina has always had a rich history of competitive teams and competitive athletes. In a state filled with stars from NFL side Carolina Panthers and a place that produced NBA MVP Steph Curry, Carolina knows that grit, determination and hard work always get you over the line. “Keep pounding” may be the Panthers’s slogan, but it’s also a statement that reflects everything within North Carolina.

The Courage came from the now-defunct Western New York Flash, a team that lacked flash or substance of any kind, despite being one of the inaugural teams in the first NWSL back in 2013 and also winning a shock title in 2016. While other teams had their star players away on national duty at the Olympics, Riley was plotting and planning.

And then the news came.

Western New York Flash was no more and was being picked up, moved and rebranded to Cary, North Carolina, after the team rights were sold to North Carolina FC. Riley had future stars in his team, with Crystal Dunn, USA’s World Cup-winning orthodox left-back, defensive stalwart Abby Dahlkemper, New Zealand’s Abby Erceg, Brazilian creator Debinha and many others.

Riley put his stamp on the team immediately. Train hard, play hard and win easy. With O’Sullivan, he encouraged her to embrace physicality as well as her creativity and the rewards would come.

They followed pretty soon. After winning the shield in their inaugural year (2017), NC Courage finished as runners-up in the NWSL playoffs, losing to Portland Thorns. But, just like O’Sullivan, they picked themselves up for 2018, winning a shield and beating the Thorns in the playoffs. The Courage finished the 2018 season with only one loss and set the record for most wins in a season (17), most goals (53) and most points (57).

O’Sullivan was also given the NC Courage MVP Awards and despite not scoring any goals, her contributions to the team were enormous. With 1,752 minutes under her belt and a pass rate of 78.5 per cent, O’Sullivan finally proved her worth in a league glistening with stars and full of technically gifted players.

This year was to be filled with similar fortunes and another team MVP came after a season in which NC Courage won another league shield, and O’Sullivan amassed 22 games distributing 1,102 passes with a season-high success rate of 84 per cent.

Now, O’Sullivan and NC Courage face the independent franchise, Chicago Red Stars, in the NWSL finals. Chicago are an unbroken consistent model who always seem to miss out on glory. Led by midfield maestro Julie Ertz, O’Sullivan and co face a stellar test, but just like youth teams in Wilton, Peamount, Cork city, Glasgow, Houston and North Carolina, you can be sure O’Sullivan will be at the forefront.

Coach Riley’s instructions will be the same as always: “You’ve got to get your heads up, just go at it, and do what we do best.”

May the best team win.