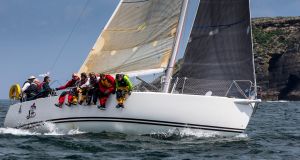 John Maybury’s Joker 2. The Royal Irish Yacht Club boat has enjoyed a consistent run of form over recent years, and the 2018 season is no exception. Photograph: David Branigan/Oceansport

Virtually unopposed in class one due to a decision by many of the top boats not to attend due to the sea-distance involved, the Royal Irish Yacht Club (RIYC) boat looked like capping a strong season of wins.

A fleet of 56 boats has entered the championships, with a significant majority drawn from west coast clubs. In previous years at eastern and south coast venues the championship might be expected to attract 90 to 120 entries.

The RIYC boat has enjoyed a consistent run of form over the past few years, and the 2018 season is no exception. Already Joker 2 has placed second overall in the Volvo Round Ireland Race in June featuring a Defence Forces crew skippered by Commandant Barry Byrne. Under his command Joker 2 was top Corinthian boat, and also won the new Services Trophy for the 705-mile race for which they were runner-up.

That result was the warm-up to Volvo Cork Week last month, when Byrne’s team retained their Beaufort Cup that they previously won in 2016, also racing on Joker 2.

With a fourth ICRA national title in his sights, Maybury made the decision to sail to Galway – it takes longer to get to Galway by sea than to compete in the event – though this willingness was not shared by many of the other Dublin and Cork boats, particularly the J109s.

However, the four-day series which was to start on Wednesday with the West of Ireland Offshore Racing Association championships has failed to begin due to strong winds on the west coast.

Wednesday was cancelled, and with winds gusting to near gale force on Thursday morning, the decision was taken to postpone all racing again. The forecast for Friday is for even stronger winds, again reaching near gale strength, so racing may yet be curtailed for a third day.

“It’s not looking too good with today’s racing cancelled due to the strong gusts, and the forecast [for Friday] doesn’t look any better,” ICRA commodore Simon McGibney told The Irish Times. “The only saving grace is that Saturday looks to be brightening up.”

Part of the issue is that the fleet is berthed in the shelter of Galway Port’s inner harbour which is contained behind tidal dock gates and is subject to certain opening times. Were facilities available for all tidal states, should the conditions ease the fleet could depart for the race area immediately.

“It would be a completely different story if we had an all-states-of-tide facility which they have future plans for, but that facility isn’t there for us when we require it. Any of the back-up plans we had in place, due to the strength and direction of the wind were not feasible.”

Moorings were planned outside the tidal gates, but it was decided these would not be safe given the conditions.

Commercial shipping priorities plus the tide times mean that organisers are keeping Friday evening open for possible racing. Saturday’s forecast is also more promising, but again the closing of the dock gates means the fleet must end racing not later than 3pm.

Already an early start is scheduled for Saturday, and the possibility then remains open of achieving the minimum championship standard of three races.

“The weather we’re experiencing is unprecedented for this time of year in this location,” said McGibney. “People are very frustrated, but there is also a lot of understanding as well.”

Joker 2 may yet earn a fourth title ahead of a long cruise home to Dún Laoghaire.