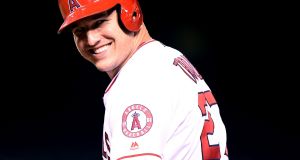 Earlier this month, Mike Trout turned 27, halfway through a campaign where the Los Angeles Angels are paying him a smidgen over $34 million to patrol centre field, to hit home runs and to thrill. Just seven years into his major league career, already acknowledged by all as the best player in the sport, his statistics, the sine qua non of baseball, are so gaudy that informed pundits talk of him having the potential to become the greatest to ever play the game. He’s that good.

With a downhome, “aw shucks” demeanour, this clean-cut, wholesome slugger from a blue-collar, manufacturing town in New Jersey might have strayed straight from the lyrics of a Bruce Springsteen song. Except if he had, he’d probably be a bit a more famous than he is now. See, Trout is, in many ways, the anonymous superstar. In the era of all-intrusive social media and instant viral celebrity, he is an anomaly, a genuine sporting icon who can walk unmolested through the streets of most American cities.

Those who follow the game might spend their time obsessing over his historic assault on various long-standing records, comparing him to legends like Ted Williams and Mickey Mantle, but a large percentage of the general population would fail to pick his usually smiling face out of a line-up. An exaggeration? Well, even those in charge of marketing baseball admit he has none of the celebrity and precious little of the fame that usually comes with bestriding the traditional national pastime. He’s America’s best-kept secret.

“Mike’s a great, great player and a really nice person,” said Rob Manfred, commissioner of Major League Baseball, last month. “But he’s made certain decisions about what he wants to do and what he doesn’t want to do, and how he wants to spend his free time and how he doesn’t want to spend his free time. That’s up to him. If he wants to engage and be more active in that area, I think we could help him make his brand really, really big. But he has to make a decision that he’s prepared to engage in that area. It takes time and effort.”

Manfred was slammed for his criticism of Trout’s disinterest in enlarging his persona beyond the baseball diamond and his reluctance to turn himself into a brand. After all, his supporters argue, he is already everything we are supposed to prize in our athletes. A humble character who always puts his team first, he works diligently on his weaknesses in the off-season, makes time for fans before and after games, and, a family man who married his high school sweetheart, he has never been attended by a whiff of scandal. A player only interested in playing. Imagine.

At this point in the evolution of modern sport, baseball can’t afford for its brightest light to want only to shine on the field

Instead of flaunting his bling on Instagram, taunting opponents on Twitter or turning up on television relentlessly flogging products, he prefers to spend his downtime in his hometown of Millville, hunting, fishing and following his beloved Philadelphia Eagles in the NFL. He is a throwback to a different and, some would say, better time, but the problem is that, at this point in the evolution of modern sport, baseball can’t afford for its brightest light to want only to shine on the field. They also need him to do the sort of extra-curricular stuff that will cause him to transcend the game and draw people to it.

That’s a rather big ask when he turns down most commercial opportunities and invitations to appear on high-profile television shows. It also explains why the Washington Post reported last month that, according to marketability metrics (such things apparently exist), baseball’s best player has the name recognition of an NBA benchwarmer. He’s not even on the top-five-selling jerseys in his own sport, and his desire to not spend his spare time shooting ads or yukking it up on late-night talk-show couches is only half the reason why. There are other factors that are beyond his control.

Too many kids don’t know who he is because too many kids don’t watch baseball. At all. Games take too long to play, the breaks between action are infuriating, and the whole affair is just excessively pastoral and meandering for a blinking, YouTube-watching generation with ever-shrinking attention spans. It’s not Trout’s fault that attendances are down, television audiences are falling, and the average baseball fan is now a sclerotic, middle-aged white male, constantly lamenting the fact you don’t see too many fathers on the lawn playing catch with their sons anymore.

That Trout plays on the west coast, in a time zone that ensures most of America is climbing into bed when he steps up to bat, is also unfortunate. As is the fact the Angels have been to the playoffs (the one time of year when casual fans tune in) just once during his career. Derek Jeter, the last baseball player to enjoy real fame beyond the sport, was never the best New York Yankee but his team were perennial contenders. And his presence in the media capital of the country and the way he embraced all the concomitant possibilities (hosting Saturday Night Live, dating Mariah Carey and a slew of other starlets) gained him notoriety far beyond the Bronx.

Trout grew up watching Jeter in his pinstriped pomp, worshipping the shortstop and wanting to one day be him. On the field. Not off it. There’s the rub.