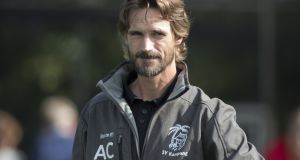 Ireland coach Alexander: will run the rule over the Ireland squad when they gather at Lisnagarvey. Photograph: Koen Suyk

New Irish coach Alexander Cox has named an extensive 28-player squad as the World Cup comes into focus for the men’s side following the women’s heroics in London.

For the Dutchman, his side will convene for the first time together since he took on the role on September 10th and 11th with Lisnagarvey the host venue.

It follows a scheduled month’s break from activity since the Real Four Nations in Dusseldorf in July as they begin their preparations for Bhubaneswar, India in late November.

In terms of players, there is no place this time for Cork man Julian Dale – two weeks into a stint with Royal Daring in Belgium – Owen Magee and Neal Glassey.

Three Rock Rovers’ Ben Walker missed most of the summer programme but is available now following the conclusion of his Leaving Certificate.

Cox says his first training panel is “a big number” but says he is looking at it as an “opportunity to have a good insight of the depth of the Green Machine”.

It is a cosmopolitan line-up with seven Belgium-based players and three each in the Netherlands, Germany and England.

Their currently confirmed World Cup challenge matches will see them play in a Four Nations tournament in Valencia against the Netherlands, Spain and Argentina in late October before flying out to India.

There, they will open their campaign against world number one Australia on November 30th before facing outsiders China and then England.

Like the women’s competition, top spot sees them straight through to the quarter-finals while second or third ensures a crossover tie.