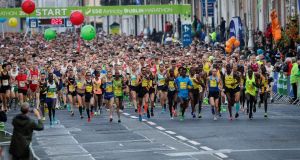 Canadian distance runner Natasha Yaremczuk has been banned for 14 months after failing an anti-doping test in the Dublin marathon last October, which she claimed was the result of a food supplement.

The 38 year-old Yaremczuk, who lives in the US, finished as the 10th best woman overall in Dublin, in a time of 2:52:38. Afterwards she was selected for an in-competition test, carried out by Sport Ireland on behalf of the Dublin marathon, the full details of which have now been confirmed.

According to Sport Ireland, Yaremczuk committed a violation of Article 2.1 of the Irish Anti-Doping Rules “ the presence of a Prohibited Substance or its Metabolites or Markers” in the sample, testing positive for the presence of the prohibited substances 1,3-dimethylbutylamine (DMBA) and higenamine.

DMBA is a banned stimulant similar to Methylhexanamine (MHA), while higenamine is a beta-receptor often used in weight-loss products, banned for use in sport since 2017

Yaremczuk admitted the violation and pursuant to Article 7.6.4 of the Irish Anti-Doping Rules, she engaged in a consultation process with Sport Ireland regarding the appropriate period of ineligibility.

In accordance with Article 7.6.4 of the Irish Anti-Doping Rules, Sport Ireland issued this decision, which records that, “the Athlete has committed a violation of Article 2.1 of the Rules, that she is subject to a 14 month period of ineligibility which expires on 29 December 2018 and Pursuant to Article 9.1 of the Rules, her result in the Dublin Marathon on 29 October 2017 is automatically disqualified”.

In the reasoned decision, Yaremczuk admitted that she had been using a B-12 supplement XMBurn since 2014, but was unaware that it contained the specified substances.

According to their 2017 Anti-Doping annual report, now in its 18th year, of the 989 tests carried out by Sport Ireland, across 22 sports, this was the only one which came back positive.

Last August, two months before Dublin, Yaremczuk produced the ninth-best time in the history of the Reykjavik Marathon winning in 2:53:25, a margin of almost 15 minutes.

She is also a former world-class triathlete for Canada (she competed at the Pan American Games and Commonwealth Games). She also ran 2:51:01 in the 2013 Toronto marathon, with a best of 2:47:15 from the 2014 Boston Marathon.