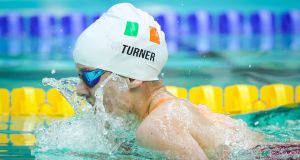 Ireland’s Ellen Keane missed out on a medal in the women’s 100 metre butterfly S9 final at the 2018 Para European Swimming Championships in Dublin on Wednesday night.

Spain also took gold through Sarai Gascon, who swam to a time of 1.08.24 - 0.94 seconds behind Britain’s silver medallist Toni Shaw.

Despite her disappointment on Wednesday Keane still has plenty to look forward to at the championships - the Rio 2016 bronze medal winner has another three events lined up at the National Aquatic Centre.

Earlier Barry McClements finished fifth in the men’s 100 metre butterfly S9 final with a time of 1.03.76.

Italy’s Federico Morlacchi took gold in a time of 1.00.11 - a fraction ahead of compatriot Simone Barlaam who won silver after swimming 1.00.76.

In a hotly-contested final Jose Antonio Mari Alcaraz of Spain secured bronze with a time of 1.01.15 - ahead of Croatia’s Kristijan Vincetic who finished in front of McClements after swimming 1.02.23.

Meanwhile Nicole Turner also narrowly missed out on a podium place in the women’s 100 metre breaststroke SB6 final, which was won by Britain’s Maisie Summers-Newton.

Summers-Newton had already swam just the second ever Ireland-set para-swimming world record of 2:59.60 seconds in the women’s 200 individual medley SM6 event on Tuesday.

And she added another on Wednesday night - winning gold in a staggering world record time of 1.33.36 - finishing 7.93 seconds ahead of compatriot and Paralympic hero Ellie Simmonds.

Ireland’s Turner was just pipped by Simmonds in Wednesday morning’s heats, finishing second in a time of 1.44.76 - 1.36 seconds off the winner.

And she eclipsed this time in the final - swimming 1.43.69 - but she was beaten into third by the Ukraine’s Viktoriia Savtsova, who took bronze in a time of 1.41.93.