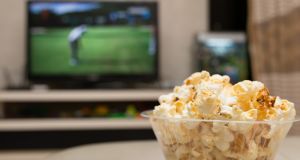 If a big draw and storyline such as the Tiger Woods comeback are not enticing people to watch, then there lies a tragedy. Photograph: iStock

Last weekend was difficult for me. Firstly, I was informed that although my house is a dog-only house, we have now adopted a cat, who has been christened Tiger Woods. Bad enough adopting the cat and my head already being in a spin about how times were changing, but on Sunday night, I sat down to watch the PGA Championship and watch Tiger Woods – the golfer not the cat. I had my packet of Bourbon Cream biscuits, and my Coca Cola fridge stocked up. This was it. The revolutionary weekend had begun.

For ages I have found myself preaching to my parents, siblings, friends and anyone around me that sport and media are rapidly changing. My dad, who buys newspapers regularly, always tells me how beautiful it is to sit down, feel the pages turn and all that old man nonsense you go to a pub to hear. I called everyone around me old, old-fashioned and told them the times were changing and they needed to catch up or face being left behind. And everyone would look at me and think, “What a stupid millennial. Leave us old fogies alone where we are happy.”

Karma bit back. After tucking into my first Bourbon Cream and finishing up my Super Copa celebrations, I flicked to Sky Sports Golf to watch the greatest golfer to ever exist. I was greeted with highlights of Jack, and I thought to myself, “How lovely I get a gentle introduction here, I can find my comfy spot.” But the highlights kept rolling. I checked my social media and saw Tiger was ploughing through the course and Koepka was playing out of his mind to keep ahead. And then it hit me. With all the channels I subscribe to and with all the money Rupert Murdoch pries from my hands, I had to buy yet another subscription to watch golf.

The game that used to help me wind down was now driving my blood pressure so high I couldn’t taste my biscuits. I panicked. I bought the Eleven Sports subscription. Panicked some more. And then discovered my beloved smart TV couldn’t do the thing I bragged so much about. It couldn’t transfer the picture wirelessly. Here I am, watching potentially the greatest comeback on my iPhone, while my 72-inch smart TV remained blank.

Spoiler alert: I got there after Tiger played 15 holes. Yeah, he did some magical things and made me dream again about the last time Tiger won a major. I could watch the game on TV. I wasn’t distracted by scrolling through my feed reading hilarious tweets. And I was not trying to get the perfect boomerang to upload to my Instagram. Now, on a blurry screen, as my wifi wasn’t up to scratch, just like in many rural areas, I watched Tiger, Koepka and Scott tee off with everyone behind and around them trying to get the perfect Boomerang, Snapchat or picture. Eleven years ago, when Woods won his last PGA Championship, the iPhone had only been on the market for 45 days. Now, Apple is worth a trillion dollars.

During the time I was mocking everyone for not moving with the times, I discovered I was becoming Abe Simpson from The Simpsons yelling at the cloud. I too was becoming an old fogie and hating on those jerks who pay lots of money to attend something only to record themselves at said event they spent a fortune to attend.

Times are changing. Eleven Sports is just the start of it. The €59 I paid allows me to watch La Liga, Serie A, UFC, golf and NBA. I pay another €69 to watch NFL and the Premier League along with the GAA. Mix in with that BT Sport, Eurosport, Amazon Prime and Premier Sports, and you are suddenly looking at a subscription cost that would just barely pay for a bedroom in a suburb in Dublin.

Irrespective, it shows that the current bidding war for sports rights is not right nor is it fair. People already pay an incredibly high amount to watch their favourite sports. There was a time that a simple Sky subscription sufficed, a time when things were simpler.

It is incredibly disappointing that the broadcasting rights are so ludicrous, Sky are effectively paying £11 million per match. Think about it: for every goal Mo Salah gets in the Premier League, it costs Sky and Rupert £11 million to bring it to your sitting room. That alone could pay for PGA rights and US Open tennis matches. Supply and demand, my friend.

The only thing is, the demand is slowly falling. BT Sport pulled in 546,000 viewers in the UK for its opening game, Wolves v Everton. After golf switched from BBC to Sky, figures fell 3.6 million in a year. On Saturday the European championships multisports event from Berlin and Glasgow peaked at 4.69 million viewers on the BBC. Either more people love running, pommel horse, diving and other minority sports more than they love the best league in the world, or people have had enough.

I doubt we will see the figures from Eleven Sports soon. The sheer hassle alone caused me to switch off after Tiger. If a big draw and storyline such as the Tiger Woods comeback are not enticing people to watch, then there lies a tragedy. However, the biggest disaster of them all is the people who want to access their favourite sports but can’t. Modernisation of the world has always meant more inclusivity and accessibility. But as sporting organisations are being blinded by currency symbols and cheques, the inequality gap is widening all the time. Call me an old fogie, but I don’t like it.