Barring a major upset, an Irishwoman will be crowned queen of the court in Minnesota 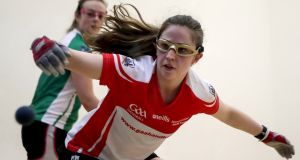 Catriona Casey: among a strong line-up of Irish women competing at the University of Minnesota in Minneapolis this week. Photograph: Laszlo Geczo/Inpho

When the story comes to be written, it may well be the shot that signalled the dawn of a new era in the sport of handball, triggering the emergence of an underground phenomenon into the mainstream.

The methodical Casey, just 27 herself, has routinely been spoken about as the best female athlete ever to play the sport, and had made a couple of attempts to qualify for the men’s pro tour in the States. McMahon had been climbing the ranks, displaying an explosive, two-handed attacking style.

The ingredients were in the mix and, suddenly, the pot came to the boil.

“The standard has been very, very high. It’s probably the best game of ladies’ handball I’ve ever seen between two terrific athletes,” stated colour commentator Gavin Buggy, a senior handballer from Wexford, as the game reached its conclusion.

The third and deciding set, to 21, was tied at 20-all when, on the ninth shot of a tense rally, McMahon planted her feet and mustered up the championship-winning kill, an awesome, perfectly-executed 39-foot roll-out from the backwall.

And, as she punched the air in delight, the realisation set in among the doubters, of which there are always some when it comes to female sport: these girls have got game.

Four months on, McMahon and Casey are at the University of Minnesota in Minneapolis this week for the World Handball Championships, with the round of 16 serving off on Thursday. Joining them in a stellar Open Singles line-up are the reigning champion, Aisling Reilly from Antrim, and dark horse Ciana Ní Churaoin, a former Galway ladies footballer, as well as the pick of the Americans and Canadians.

It is, without doubt, the strongest field ever assembled for a female handball tournament, and the Irish players are leading the way. While handball is long-established in this country, the female game only really began to take root in the 1990s, with Antrim’s Fiona Shannon – a three-time world champion and a ferocious competitor – the first Irish woman to compete strongly internationally.

Fast-forward a couple of decades, though, and Ireland are now dominant. They started from the bottom, as the song says, now they’re here.

“I think it’s the toughest field in a female World Championships that I have ever seen. The American females are definitely coming up, I do think the Irish have that little bit of an edge over them still, but I wouldn’t underestimate any of them because they’re slowly catching up on us,” McMahon told The Irish Times last week.

While there was an element of luck about how some of this golden generation took up the game – Reilly “just fell into it” when, as a nine-year-old camóg, she took shelter from a rain shower in the St Paul’s handball complex, while McMahon followed her older brother to the alley having seen an ad in the local paper – they have managed to elevate the game.

The skill levels have soared and that has fed down to the juvenile grades.

“The underage players now seem to be playing more intelligently and have evolved, they have all the shots, their left and right hands are equal,” said McMahon, a former Limerick minor camogie centre-forward.

“In another couple of years, we’d all want to be watching our backs, there are some great youngsters coming up behind us. It’s great to see girls sticking at it and developing their skills and the enjoyment they get out of it.”

Much of that has to do with a far-sighted approach from GAA Handball in Croke Park. Women and girls account for approximately 20 per cent of their 15,000-strong membership base, but the female game enjoys equal promotion, with senior ladies’ finals, for example, sharing the bill with the men’s deciders.

“We have an excellent batch of young players aged 13-17, and our challenge now is to maintain this new crop into adulthood,” says GAA Handball’s acting national manager Darragh Daly.

“That is the challenge for most sports, but as an association we are trying to implement structural changes to make this transition easier and more natural.”

Among these innovations is a female-only weekend festival of handball each January called She’s Ace. Numbers taking part in it have climbed to over 200 and continue to rise annually.

“This has worked really well. It gives us the opportunity to showcase our senior ladies to the younger girls and also to encourage participation, so we have females aged eight to 50 compete together under the one roof in a fun atmosphere.

“We have introduced fun ‘mother and daughter’ events and beginner challenges and the interest levels have gone through the roof as a result.”

We have a very strong group of five or six girls at senior level and 100 per cent, the standard has never been higher

Some challenges remain. While the number of girls playing handball has mirrored the rise in standard of the top players, not all of the 200 clubs nationwide have strong coaching structures in place. In some areas, a scattergun approach remains.

“I think I was very fortunate in the fact that we had a juvenile coach there who was very structured,” says Reilly.

“When I started, there were a lot of other kids playing and a few of us stuck at it because it was well organised. Other clubs don’t have that fundamental structure and players can slip through the cracks.”

Ironically, too, the incredible athleticism and ambidexterity of the top half dozen Irish players could be contributing to a drop-off rate among the late teens, Reilly feels.

“We have a very strong group of five or six girls at senior level and 100 per cent, the standard has never been higher. Now, if we had 13, 14 or 15 it would be much better, obviously, but you’re competing with other sports as well.

“I played a lot of camogie and ladies’ football, but handball took over for me, even though I played county in both. That won’t be the same with everyone.

“And then I think some of the best juvenile girls are a bit apprehensive when they come up from minor, and that’s when we can see a drop-off, because the gap is there from minor to senior. But they have to push themselves.”

Which is exactly what the elite Irish players have done. While the likes of Tracy Davis, New Yorker Danielle Daskalakis and Suzanne Entzeroth – a markswoman in the US Air Force National Guard – lead the way for the Americans, barring a major upset, an Irishwoman will be crowned queen of the court this week in the mid-west.

When McMahon won in March, she immediately embraced her mother, Rose, who attends all of her matches.

For one Irish woman, it will. The sky’s the limit.

Keith Higgins becomes the latest Mayo stalwart to hang up his football boots 12:54
‘Don’t write me off yet’: Conor McGregor to fight on after Poirier knockout 11:35
Tony Finau shares the lead heading into last round in La Quinta 11:21
Sunday’s Thurles card called off due to snow 11:10
Conor McGregor stopped by Dustin Poirier in second round 06:33