Ireland has a new boxing world champion in TJ Doheny 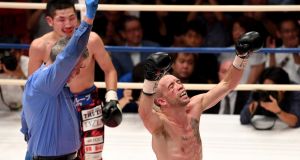 The win was as unforeseen as that of Ireland’s Barcelona Olympic silver medallist, Wayne McCullough, who also travelled to Japan in 1995 to earn his WBC bantamweight world title somewhat under the Irish radar.

Fine margins ultimately decided the outcome with the judges going against most of the local opinion as well as some ESPN analysts. In fact the crowd were stunned by the outcome believing their local man had done enough to retain his title in just his second defence.

The most significant victory of his career to date takes Doheny’s professional record to 20 wins and no defeats with 14 of his victories coming via KO and now more to come.

It may also give Paddy Barnes and Carl Frampton a lift as they head into a hugely important weekend for their careers. Both 31-years-old Barnes, a twice Olympic bronze medallist, is also hoping to win his first professional title in Windsor Park on Saturday after just six fights. If he succeeds he will beat Katie Taylor’s mark of taking the WBA world lightweight title in her seventh professional bout.

Barnes will step into the ring with the Nicaraguan boxer Cristofer Rosales for the WBC world flyweight belt as part of the undercard to Frampton’s fight against Australian Luke Jackson, which is a hoped for stepping stone in his journey back to a world title shot.