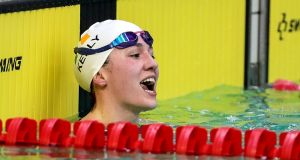 On Tuesday night every athlete had a tale to tell as day two of the 2018 Para European Swimming Championships rolled on in Dublin’s National Aquatic Centre, a scene of sporting innovation and creativity.

No greater a story from British swimmer Maisie Summers-Newton, who baptised the Irish venue with a second ever Ireland-set para-swimming world record of 2:59.60 seconds in the women’s 200 individual medley SM6 event.

She would be later followed by British teammate Thomas Hamer, whose 1:55.71 seconds redrew his own world record in the 200m freestyle S14.

The Brits also completed a one-two-three in the women’s 200m freestyle with Bethany Firth leading out. They sure know how to run an elite programme.

Summers-Newton’s blazing four lengths knocked 0.21 seconds off the Rio world record. Swimming with Ireland’s Nicola Turner, awaiting her Junior Cert results but out of the medals in fifth position, the Irish teenager finished in 3:09.34 seconds, smashing her qualifying time of 3:13.34 seconds. Good karma for that letter soon arriving.

“I didn’t think I was going to go that quick,” said a tearful Summers-Newton. “I wanted to go quicker than this morning and this morning was a PB as well. To get a new world record, I just can’t believe it.”

A third record tumbled to an approving crowd in the men’s S9 100m freestyle, Italy’s Simone Barlaam cleaning a chunk off the European mark, his dash over two lengths just 54.42 seconds.

A fourth record of the day fell in the final relay of the night, Ukraine beating the world mark with 2:39 seconds in the 4X50m mixed medley.

A European event with an Irish feel, four athletes qualified for the evening finals, Patrick Flanagan and Turner both swimming in 200 IM events in the SM6 category. Ailbhe Kelly was ranked sixth going into her final of the 400 Freestyle S8, while visually impaired Sean O’Riordan earned a straight entry to the 100m backstroke final.

Coaches walked the banks armed with long rods with soft balls attached at the end to alert the visually impaired with a gentle tap that they were approaching the turn.

More than any sport the coaches are there with their swimmers urging faith in their strokes, and in some instances their ability to stay in lane and maintain their bearings.

The was no appearance last night of the face of para-swimming Ellen Keane, who won bronze in the SB8 100m breaststroke in Rio two years ago. Keane races on Wednesday in the 100m butterfly S9, her first of four expectant swims.

The evening opened with a demonstration of sorts by the peerless Ukraine’s Maksym Krypak. The European and World record holder and gold medal winner in Rio took out the men in their opening 100m backstroke S10 final. A smooth act, Krypak turned first and swam to gold in 57.68, a little off his European best of 57.24 but comfortably touching first.

Patrick Flanagan in the 200m IM was the first of the Irish to go. This was a major debut from the UCD student from Longford who has spina bifida.

His time of 3:20.31 seconds was outside the podium places. Yet the 21-year-old was pleased with his swim and has three more races later in the week.

“I was ranked ninth coming into this competition. I wasn’t expecting to make this final. The fact that I got to swim the final faster than this morning I can’t really complain,” he said. His morning swim was 3:20.47.

“This was the main priority for the last two years because we didn’t do a major championship last year. I’m very happy the way it’s going so far. I’ve three more races. I’ve 100m backstroke, the 400m free and the 200m free.”

Kelly, who came sixth in her 400m freestyle final, was also pleased with the evening effort, which was more than four seconds better than her morning qualification swim of 5:38.54 seconds.

Not far from her home in Dublin’s Castleknock, Kelly who swims in the National Aquatic Centre Swim Club along with fellow senior squad members Keane and James Scully, was encouraged.

A serial improver, Kelly at 15 years of age made her international competition debut in 2014 at the European Swimming Championships in Eindhoven, swimming an impressive three lifetime bests in the S8 100m backstroke (twice), and the 400m freestyle to finish fifth overall in each.Tuesday night was once again a new personal best.

“I’m really, really happy that was a new PB for me by two seconds,” said Kelly. “I set that PB in 2016, and I haven’t got near it for two years. I’m so happy to have finally broken it, and by such a large margin as well.”

Kelly’s main event, the 100m backstroke is still to come on Thursday, with the 100m freestyle on Friday.

Cork swimmer O’Riordan, who made his debut just last year, also shaved seconds off his qualifying time in the 100m breaststroke, his 1:21.29 put him in seventh place.