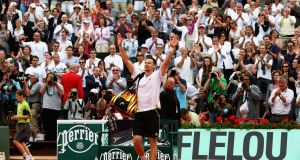 Robin Soderling of Sweden salutes the fans after beating Rafael Nadal at the French Open in 2009. Photo: Ryan Pierse/Getty Images

Martina Navratilova, commentating for television at the time, described it “as one of the greatest upsets in Grand Slam history,” as she struggled to contextualise Robin Soderling’s 6-2, 6-7 (2), 6-4, 7-6 (2) quarter-final victory over Rafael Nadal in the 2009 French Open at Roland Garros.

Nadal was chasing a fifth straight French Open title, having won 31 consecutive matches at Roland Garros to that point, eclipsing the previous record, held by the six-time champion, Bjorn Borg (28). The Spaniard, seeded one in Paris for the first time despite his previous success, had eviscerated Soderling 6-1, 6-0 on the red clay of Rome a couple of weeks earlier.

The six foot, four inch Swede, seeded 23 for the tournament, had no real pedigree on the surface but there were a number of ancillary issues that hovered in the background, the first of which was the rumour that Nadal was struggling with tendonitis in his knees, traced to a final defeat to Roger Federer in Madrid.

He didn’t appear encumbered at Roland Garros, betraying no signs in his movement, and the Spaniard didn’t use it as a crutch in defeat. There was also a little needle too, a toxic relationship that dated back to a five set, third round meeting at the 2007 Wimbledon championships, a match which Nadal won but took five days to complete because of rain delays.

Soderling had mimicked a Nadal mannerism at one point, picking at the seat of his shorts which drew laughter from the crowd, as the Swede became frustrated by his opponent’s pre-point tics, particularly awaiting serve. He claimed he did it as a joke but ventured afterwards: “I think I had to wait for him, I mean, more than 200 times. Every point I had to wait for him.”

Nadal noted the discourtesy, describing it as “not nice,” before adding “we will see what is happening at the end of life, no?” He also claimed that he tried to say hello to the Swede “seven times” without getting a response and added: “I asked around the locker room and no-one has anything good to say about him.” Perfunctory wouldn’t do justice to the post-match ‘handshake’ before Soderling scarpered.

In 2009, the Swede, despite a lack of success in the Grand Slams, was steadily climbing the world rankings – he reached number four a little shy of 18 months later – and he would go onto the win 10 tournaments before being forced out of the game, at 26 in 2011, following a diagnosis of mononucleosis that compromised his immune system, leaving him weak and fatigued.

He didn’t officially retire until 2015, hoping all the while that he could find a solution. It wasn’t the only battle he fought. In an interview on the ATP tour site earlier this year, he bravely laid bare his mental health issues that first surfaced in 2011 following a victory in the Swedish Open. He recalled: “I wanted to crawl out of my own skin.

“In 2011, I was in the best physical shape of my life. I was one of the five best players in the world and I had won four titles by the end of July. But from one day to another, I couldn’t take a step. I couldn’t breathe. I had a ton of energy, but not positive energy. I couldn’t find a way to calm myself down, and I only managed to sleep a couple of hours every night.

“Many of you know I contracted mononucleosis, which ended my career. But I think it’s even more important to speak about the severe mental illness I battled during and after that period. The problems started with my immune system. I often got sick, catching a lot of colds, sore throats and fevers. I would get really dizzy and had trouble sleeping.”

Soderling explained that all his life his answer to setbacks was to push himself harder. The solution was the problem, mentally and physically. He offered an interesting insight into his mindset that day at the French Open when he beat Nadal. “I went into the match with absolutely nothing to lose and everything to win. I didn’t know how to play with topspin anyway, so I just played even flatter.

“I didn’t care if I missed. I knew I wouldn’t win if I didn’t take my chances and that day it worked out really well. I was playing so freely. That was an amazing feeling. That’s the complete opposite to how I felt when I was top five in the world. Basically every match I played I was the favourite, which made it that much tougher. I was playing way too much at the end of my career not to lose instead of playing to win.

“A lot of the stress on my body and my mind added up and I really started feeling it after that Båstad tournament (Swedish Open, 2011). It felt like things changed overnight. From one day to the next, I was a completely different person. I began to suffer from severe anxiety and panic attacks. I had never experienced anything like that ever before. I didn’t have any idea what was happening to me.

“The first few years, I was really worried that I would never feel well or have a normal life again. At first, I thought I was going crazy. I didn’t have any tools. I didn’t know what was going on and I think that made it even worse. There was one idea that triggered my anxiety the most: What would happen if I have to live in this hell my entire life?”

It took him years to come to terms with his illness. He wasn’t prepared to share his story until he realised that in telling it, he just might make a difference to someone. “The thought of helping one player or one person is enough for me.

“There’s no shame in speaking about mental illness. It’s a very common problem in today’s society, no matter if you’re playing sports or working in another field. It’s something that needs to be spoken about a lot more. Doing so doesn’t make you look weak. In reality, it makes you stronger.”

After the Nadal win, Soderling went on to reach the 2009 French Open final where he was beaten by Federer, the Swiss master’s only victory in the tournament and one that enabled him to complete a career Grand Slam. The Swede joked that Federer has never thanked him for beating Nadal that year.

Indeed in 2010 Soderling beat Federer en route to a second successive final at Roland Garros but Nadal exacted revenge, winning in three sets and would beat the Swede again at Wimbledon a month later. The Spaniard then rattled off five successive French Opens from 2010, extending his previous record (31) to 39 consecutive victories at Roland Garros before losing to Novak Djokovic in a 2015 quarter-final.

Soderling’s achievement was no longer unique, a status he didn’t mind losing, although he did demonstrate remarkable prescience in an interview ahead of that 2015 French Open in which he tipped Djokovic to win, before adding: “This year, for the first time in a long time, Rafa is not the favourite. Of course, it’s going to be tough to beat Rafa at Roland Garros, over five sets on clay. But I wouldn’t be surprised if it happened.”

Nadal withdrew through injury after a third round victory in the 2016 tournament before reasserting his dominance in Paris for the past three years, taking his overall tally to 12 French Open titles. He’s two matches away from claiming a 13th - if he does so he’ll draw alongside Federer with 20 Grand Slam singles titles - starting with today’s semi-final against Argentina’s Diego Schwartzman; Djokovic and Greece’s Stefanos Tsitsipas contest the other.

Soderling, Sweden’s Davis Cup captain, who has his own company that produces a range of tennis balls, grips, strings and accessories may no longer be the only man but he will always be first to briefly reduce Nadal, the undisputed King of Roland Garros, to feet of clay on that fateful Parisian afternoon, 11 years ago.