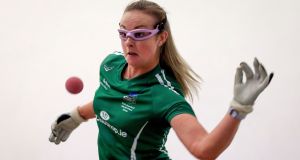 Limerick’s Martina McMahon in action on her way to winning the All-Ireland 60x30 softball title for third time in a row at Crinkle in Co Offaly. Photograph: Tommy Dickson/Inpho

It was back in 2018 when she spoke to this here paper after one of the more extraordinary years in her handball career, during which she won three world titles as well as all three major domestic crowns across the sport’s various codes, that Martina McMahon gave a hint of the amount of energy she has to burn.

While she works closer to home now, until then she was getting up at five in the morning and commuting every day from her Newcastle West base in Limerick to Ringaskiddy, south of Cork city, a four-hour return trip. And as soon as she got home, after “wolfing down” her dinner, she headed straight to training. And that’s how it was five days a week, with matches at the weekend.

So it didn’t come as any great surprise to learn that rather than passing her free time watching Netflix, like a fair chunk of us, after the start of the pandemic, McMahon opted to travel the country once travel restrictions were lifted and do relaxing things like climb Carrauntoohil. With the handball courts closed until July 20th, she had, after all, to burn that energy somehow.

When they reopened, though, and with the quarter- and semi-finals of the All-Ireland Senior Softball Championship scheduled for September, it was a case, as she told GAAHandball.ie, of “gloves tied, goggles on, ready to go”.

And boy, was she ready. She won her quarter-final 21-0, 21-0 against Laura Finn, the Sligo woman who was playing in her first senior championships. And McMahon wasn’t a whole lot less ruthless in her semi-final against Kilkenny’s Aoife Holden, winning 21-1, 21-2, neither opponent able to deal with her serve.

That, then, was some return to action, enough to earn McMahon our sportswoman of the month award for September, and she completed that return last weekend by winning her third All Ireland 60x30 softball title in a row, and her fourth in all, beating Kilkenny’s Ciara Mahon 21-2, 21-8 in the final in Offaly.

As Dessie Keegan, president of the GAA Handball Association, put it after the match: “I think Martina McMahon is probably a once in a generation handball player. She is absolutely dominant.”

The woman who has pushed McMahon the hardest in recent years, Cork’s Catriona Casey, was surprisingly beaten in the quarter-finals, but the pair hope to renew their rivalry in December when the 40x20 final is scheduled.

At this stage, though, it looks like anyone with the ambition of toppling McMahon has a mountain to climb.