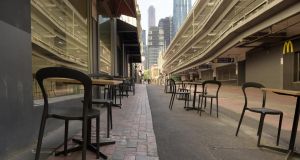 Cafe chairs and tables are set out on a lane in Melbourne on Wednesday as the city emerges from lockdown. Photograph: Carla Gottgens/Bloomberg

Normally it takes me 24 hours to fly back to Australia. One day out of your life, then another three days to get back to some sort of normality. Only like everything else this year there would be nothing normal about this journey back, and just as you adapt to the new normal things change again.

It’s been a week now since I passed through Cork Airport and I’m still nowhere near touching down in Melbourne to be reunited with my family and dogs, who I’ve been away from since July.

It wasn’t the normal summer in Ireland, but still wasn’t short of adventure and activity, making the most of a compromised situation. One thing that has stayed constant throughout the year is the importance of sport and activity. Whether you are taking part or watching, it can be a pivotal part of your day, something to look forward to, and for some more than others.

I stopped off in Teddington, southwest London to link in with some Australian athletes who took advantage of the few opportunities to race in a not-so-normal European season. A worthwhile trip but, like me, this also came with the new challenge of a two-week hotel quarantine stay on arrival back to Australia.

We’d one last run at sunrise in Bushy Park before heading for the airport for a journey that would be like no other for athletes returning home after a summer in Europe.

There was talk of creating an athlete hub, where there would be limited freedom to train, but in the end the Australian Bio secure requirements deemed this too expensive, coming in at $62,000 for the two-week period. Even the best athletes in Australia could not escape the strict hotel quarantine.

We arrived at Brisbane Airport, given there isn’t yet any international arrivals into Melbourne Airport. One thing you notice is the lack of any urgency once people are off the plane; there’s no rush, as you can’t go anywhere until you’re taken in a group.

We were handed paperwork to fill out and details of a hotel where we would be taken. Everything is handled by the Queensland police. Temperatures are taken, you wait until everyone is through, before you’re escorted to a bus and then taken to your assigned hotel. Interestingly the bus was full, so no social distancing here.

We were met at the hotel by a jolly policeman who came onto the bus, and made it feel like we were on tour. He collected our forms so that we could be allocated rooms, then we waited on the bus until we were called forward.

First the good news: we could exercise outside, so just call up and you can go to the courtyard for some fresh air. Then the bad news: as we were past midnight, this would have to wait until morning.

My only wishes were for a kettle in the room so I could maintain my coffee ritual each morning, and a window that would open. I was escorted to my room by an armed police officer who loaded up the concierge trolley with my bags. He opened the door to let me in and that’s when I realised I couldn’t leave without being escorted, as I didn’t have my own room key.

I got one wish and not the other; a small kettle, only no open window. When you’re so used to spending most hours of the day outside, to be suddenly confined to a hotel room can be quite disconcerting, and takes some getting used to. This was my new normal for the next two weeks. You think you have prepared for it, and then realise this is something you can’t possibly prepare for.

It took a while to get to sleep, and I woke up early and decided I should immediately go check out the exercise area. I made a call at 6:25am to put my name on the list, and didn’t know if I would be called in five minutes or an hour, so busied myself unpacking, when all of a sudden there was a knock on the door.

My police escort was ready. I had to quickly put on my shoes and gather the essentials – phone, headphones and stopwatch – worried I was eating into my exercise time.

On the first floor I was set free into the courtyard and told I could go anywhere in the whole area, which turned out to be a whole small area. I was ready to run, but on wet tiles and up steps, around a 130 metre loop, it was going to be a bit tricky. I walked a few laps, ran for five minutes and realised walking was the better option and maybe a few exercises.

Suddenly this little bit of exercise became the most important thing I could do, to find a routine, something that would satisfy my energy levels and give some calmness for the day that would otherwise be spent alone back in my room.

I wasn’t even sure how long I could stay out for, so I just kept walking and listening, then walking and talking on the phone, testing the limits. After two hours I had enough and was once again escorted on the lift back to my room.

Once outside you must also wear a mask, keep a distance from other people, so it’s a solitary existence. A friend sent me a list of exercises called the Shawshank circuit, a sort of play on the film Shawshank Redemption, which no I haven’t watched yet, it’s still too soon.

After a few days I still haven’t managed to bump into the others either, though we do keep in touch on WhatsApp and try to keep things light-hearted. It would be too easy to complain but its best to stay positive and just live in the moment.

It’s too early to even start thinking about counting down the days, only something more discreet, like half a lemon every day. So days are passed with the arrival of food bags outside your door, a bit like a lucky dip; some days are good some days the bag goes straight back out the door.

I’m lucky my sister Gillian lives close by, just 2km away, and has walked past and waved up at my window .Then I got a pass out so I was able to look over the balcony on the exercise yard and shout down as she picked up her daughter from school just across the road. That small connection has made the days more tolerable and you don’t feel all alone in the hotel room.

I’m back on regular sleeping now, but craving a bit of high intensity exercise, trying to add something different into each day, circuits, drills, and the latest addition being a bike in my room, borrowed from a friend.

We won’t be Covid tested until Day 10, then once all clear, we will be released four days later. Australia is still trying to eliminate Covid-19, while most countries around the world are trying to learn to live with it.

With the Olympics still pencilled in for 2021, no one knows how all this will affect Australian athletes travelling abroad to qualify, compete and then return home. Staying in a hotel for two weeks may be manageable at the end of a season, but while preparing for the Olympics it is simply not a realistic option. Even when taking it one day at a time.