Thinking back now, I sometimes do wonder if I had been more focused on winning the race 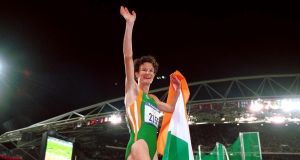 Sonia O’Sullivan waves to the crowd after her silver-medal run in the 5,000 metres final at the Sydney Olympics on September 25th, 1990. Photograph: Patrick Bolger/Inpho

At exactly 10.55 on Friday morning I will run for 14 minutes and 41 seconds, starting at Cobh Hospital and down along an old familiar route through the streets of Cobh that will lead to my statue alongside Cork harbour in the town centre.

This being the time of the race start in Ireland, and also the time it took me to run the 5,000m at the 2000 Olympics in Sydney, on the same day 20 years ago.

So much has happened in the time since that it feels like a long time ago, and in other ways there is a part of that time in Sydney that is still being brought home.

I’ve never had much interest in looking back nor reliving the past, only when the time or numbers somehow seem to align with where I am now, and when the date that has become such a part of me is worth marking in some way. Like any special anniversary of some achievement that sticks with you wherever you are.

This is also the first time in the years since that I’ve been back home in Cobh on this particular date, and sometimes I feel it’s more memorable for those that cheered and supported me through my two previous Olympics, in Barcelona in 1992 and Atlanta 1996, and many other ups and downs along the way.

For a few years after Sydney I would often get a phone call from my good friend Des Murphy, on September 25th, it didn’t matter where I was or what the time of day: Des would call and ask, ‘do you know what day it is?’ and I would pause and think day, month, date, what is it?

The years can go by so quickly, and there’s always more sporting success to celebrate, so these dates can creep up on you faster with each passing year. From Sydney 2000 to 2020, only with no Tokyo Olympics to celebrate this year, it also feels like a good time to stop and reflect and do something positive to mark the day, rather than just let it slip by.

The aim is to raise €2,000 to kick-start a funding campaign for future developments at Cobh Hospital, which like most things needs to grow and adapt to be more functional to the community.

There’s also still nothing I like better than a run. In these Covid-19 times it’s not possible to organise any big gathering or celebration, so we won’t have that, but with 200 medals specially engraved with a small picture of me from Sydney celebrating with the tricolour.

The idea also came to me while out for a run, and how I might help Cobh Hospital, who like so many rely on charitable events that have been hit hard this year.

So we’ll get things started at 10.55am, when the 5,000m final started Irish time (it was 8.55pm in Sydney) and I know that because so many people have recalled the moment, being at school and being called to the big hall to watch, or being in their offices and work place and stopping to watch or listen to on the radio.

This was still long before live streaming or smart phones, so people had to physically stop what they were doing and find somewhere to gather together and watch the race. Years later I still meet people on the street who stop to tell me where they were at that exact time.

I’ve also come to realise in the years since that while those Olympics were happening in Sydney, they were happening at another time and place in villages and towns all around Ireland. It was something that brought people together, something to get excited about, the build-up and the talk and some of the cheering as loud as in any stadium.

I had very little awareness of this, going through my daily routine and raceday preparation almost oblivious to anything that was going on at home, and certainly with very little awareness of the increasing excitement building in Ireland. This was a time when we ran heats, semi-finals and a final over 5,000m, so the build-up was more drawn out and with that the anticipation was building for those watching back at home.

It felt the same way the last few weeks with Sam Bennett, before he lined up for the final stage of the Tour de France in the green jersey. That was only going to solidify his success, when he crossed the line first in Paris, and it was as if he’d won the race outright. There was so much excitement and the whole country was talking about his victory all this week.

It’s this sharing of the joy and the lift that people get when they’re all watching and waiting that make these moments so special, especially if it feels like almost the impossible has happened.

Thinking back now on Sydney, I sometimes do wonder if I had been more focused on winning the race, than delivering a satisfying result, would things have been different?

So going into Sydney I was weighing things up; what could I achieve, what would be a positive result?

I had gone to Sydney knowing I was so close in 1992, fourth place over 3,000m a surprise perhaps, but well in sight of a medal. I’d never thought I’d be so close to a medal of any colour. Back then that was the thing of dreams.

Going into Atlanta, I was red hot favourite for the gold after winning the World Championships in 1995, winning almost all of my races that year, but things couldn’t have turned out more differently than anyone had expected.

So going into Sydney I was weighing things up; what could I achieve, what would be a positive result? I never thought about winning, maybe because I was afraid of what I had experienced in the past.

I knew I was physically fit, ready to compete, but it felt more important that I needed to run well, walk away knowing I had got the best possible result on the night. So to me winning wasn’t the only positive result I could achieve.

Maybe this time I was thinking and not dreaming. I was being realistic, knowing if the race was run over again there could be a different result, and that could just as easily be better or worse.

I also think because Ciara, my first daughter, was just one year old, and had lived that first year of her life inside the athletics world of altitude training in Falls Creek, cross-country running in Portugal, road running in Italy, track races all over Europe, I felt I needed to deliver some sort of positive result, no matter what.

Actually the clearest memory I still have from the whole night is leaving the warm-up track and walking through the tunnel into the stadium, and there’s Ciara bouncing on the pole-vault mat, moments before I line up for an Olympic final. In some ways it was all a bit surreal that I was so relaxed, both physically and mentally.

After that it’s all nervous energy and the crowd noise vibrating around the stadium, and the realisation there’s no turning back now.

There will always be that less than half a second between gold and silver, and those moments when you wonder could you have done something different, would the result be any better or worse? Only in Sydney there was this different perspective too. Does it really matter when you have the satisfaction of completing what you set out to do, and can walk off the track happy with the effort and a medal to take home and mark the achievement forever?

Because still one of my greatest joys from Sydney was to see Ciara the next morning running around the garden of the house we’d rented with my silver medal around her neck, just another new toy to play with.