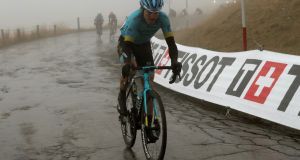 It wasn’t the queen stage as originally mapped and still some hell broke loose, first in the virtual sense, then in the cold reality that greeted some of the main contenders at the Stage 6 finish of the Vuelta a España.

Including Dan Martin - the Irish rider dropping down one place in the General Classification to third, but moving one place above defending champion Primoz Roglic: that could yet prove positively telling.

The losses and gains elsewhere at the Aramón Formigal ski resort were substantial, only there wasn’t any great shake up at the very top - only a lot of shivering, the heavy rain and low mountain temperatures adding to the already arduous day in and out of the saddle, Martin admitting his body “had stopped working” at the end.

By then it was Richard Carapaz, the Ecuadorian rider from team Ineos Grenadiers, who took over the leader’s red jersey, having starting the day in third, 13 seconds down: his 12th place finish behind stage winner Ion Izagirre from team Astana was enough to move him into the top slot, 18 seconds ahead of Britain’s Hugh Carthy from EF Pro Cycling, with Martin now 20 seconds behind Carapaz in third.

Roglic, team Jumbo-Visma’s defending champion from Slovenia, lost 43 seconds in all to Carapaz, and now sits in fourth, a full half a minute down, surprisingly isolated from team mates on the final stretch of climb.

“When I saw the weather it made me more focused as it makes the stage even more tricky,” said Martin. “With the downhills and the cold it adds more possibilities to make mistakes and lose time so I’m really happy to get through with another good performance.

“I felt good on the last climb but the higher we climbed, the colder I got and my body just stopped working. It was a case of just riding as hard as I could to the line. Carapaz and Carthy were really good and obviously coped with the conditions better than me, but I have had bad days in the cold before so this shows how good my condition is.

“It’s been an incredibly tough week of aggressive racing so we are really content with our position going into the rest day. The guys again gave their all for me and I was well supported until right into the final km. We will enjoy the rest day but still just thinking day by day and staying focused.”

A good day for Carapaz and indeed Ineos Grenadiers, formerly known as Team Sky, given he took over the red jersey not long after word came through from the Giro d’Italia that Tao Geoghegan Hart had just won the team that Grand Tour.

At one point on the wet Spanish roads, approaching the penultimate climb up the Alto de Cotefablo, the older of the Izagirre brothers, Gorka, was the virtual leader of the race, the breakaway of 21 riders 3:45 ahead of the Roglic group, with Izagirre at that point 3:37 behind on the GC. That breakaway gradually fell apart on the final 14.5km climb up Aramón Formigal, near the mountain town of Sallent de Gállego, in the central Pyrenees.

The younger Izagirre brother, Ion, also rider with Astana, made his move 3km from the top, and won the stage - his first in Vuelta - by 18 seconds from Carthy, who gained the most of the top five and might well have taken had Carapaz not limited his loss to 55 seconds, finishing 12th on the stage.

Martin finished 1:23 behind the winner in 18th, limiting his losses impressively too, especially having hit the road shortly before the finish on Stage 5 - his team mates from Israel Start-Up Nation doing everything to protect him on the day. Roglic finished another 15 seconds back, in 20th, and while he did lose his red jersey, it means he’ll wear the green jersey beginning on Tuesday’s Stage 7, Monday being the first rest day - and no doubt perfectly welcome by the riders.

Martin had already conceded some points to Roglic in the green jersey classification on Saturday. As things now stand, Roglic will remains the green jersey leader with 79 points, Carapaz is now second with 61 points, with Martin sitting third with 57 points.

Stage 6 was originally mapped as the queen stage given it was due to finish on the famed Col du Tourmalet, just over the border in France, but Covid-19 restrictions meant a change in direction, agreed on Thursday, only given the weather the shortened 146.4km didn’t feel much easier.

Certainly not for Sam Bennett, not a great fan of the mountains or indeed the rain, who once again judged his efforts suitably well according to the day and finished back down in the group 18:09 behind, in 149th, his faithful Deceuninck-Quick Step team mate Michael Morkov for company.

For Martin the relatively safe finishing position going into Monday’s race day is welcome too after Saturday’s minor collision on hilly finish line at Sabiñanigo where he suddenly found himself tangled up in blue - as in the bikes and jerseys of two riders from team Astana and Movistar. Next Tuesday and Wednesday bring more hilly and mountainous stages, the next flat stages for Bennett and company coming on Stage 9 and Stage 10, next Thursday and Friday, then the final Stage 18 finish in Madrid. Still a long two weeks to go.