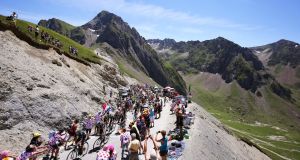 This 75th edition of the Vuelta was originally meant to open with three flat stages in the Netherlands, but instead now cuts straight to a high mountain chase. Photograph: KT/Tim De Waele/Corbis via Getty Images

In another lifetime Sam Bennett may have already helped himself to one of the three perfectly flat stages that opened the 2020 Vuelta a España and finished up with another inevitable comparison to Seán Kelly.

Instead, the cycling season like everything else turned upside down and inside out, Bennett will begin Tuesday’s race in Irún in the mountains of the Basque Country, the start two months later than originally planned, the first stage now a summit finish near the Sanctuary of Arrate.

La Vuelta has always had a reputation for being the most unpredictable of cycling’s three Grand Tours; this one goes beyond any safe forecast, including the weather given the time of year and where it’s going.

What appears certain, for now, is that all 22 teams and 176 riders will make Tuesday’s start, the last round of 498 pre-race Covid-19 tests showing up only two positives among staff members, which won’t impact on the race.

How many teams and riders will make the finish in Madrid on November 8th will depend on a variety factors, including the fact that even three stages shorter, it’s a brutally hard route.

Set against the backdrop of Spain’s 15,196 new cases of the virus last Friday, their highest daily total since the pandemic began, and with all summit finishes and most of the iconic climbs closed to spectators, some are questioning the sense in allowing the race go ahead at all, although like the Giro d’Italia, now entering its final week, there is enough public and government support.

What appears certain too is that it will be a very different sort of challenge for Bennett compared to the Tour de France, which he finished on September 20th on the Champs-Élysées with his second stage win, his sixth top five, and the outright winner of the greens points classification jersey – bridging the 31-year gap since Kelly was the last Irish rider to win green in Paris.

This 75th edition of the Vuelta was originally meant to open with those three perfectly flat stages in the Netherlands, starting in Utrecht, but instead cuts straight to a high mountain chase; only four strictly flat stages remain, starting on Friday’s Stage 4 run from Garray to Ejea de los Caballeros, across the eastern plains of Aragon, two more on Stage 9 and Stage 10, then the final Stage 18 finish in Madrid.

This will also be the first time Bennett has ridden in two Grand Tours in the same season. He has the fresh experience of last year’s Vuelta, where he won two sprint stages (3 and 13), also finishing second in the final stage in Madrid; he also briefly wore the green jersey for three days after stage 4.

Unlike the Tour, the intermediate sprint points are minor, and also equal between the mountain and the flat finishes, which means the Vuelta’s green jersey is traditionally a lot closer to the overall leader’s red jersey.

“It will be great to push my limits and see what I’m capable of, my first time doing two Grand Tours in one season,” Bennett said after being confirmed as part of the eight-man Deceuninck-Quick-Step team.

He’ll be supported again by a strong lead-out train featuring Michael Morkov and Zdenek Stybar, a stage winner at the race in 2013, but even more than the Tour there are several stages which for Bennett, who turned 30 last Friday, will be purely about survival.

Kelly also won the Vuelta outright in 1988 to go with his green jersey, which he also won in Spain in 1986, 1985, and 1980 – not forgetting the 1987 race, where he took over the overall lead on Stage 18, with only four stages to go, but had to abandon after a saddle boil became infected.

Kelly won 16 stages in total, but Bennett shook out some rusty legs and perhaps nerves when finishing eighth in the 108th Scheldeprijs last Wednesday, and will certainly be eying up Friday’s finish.

Dan Martin is also back for his second Grand Tour of the season with Israel Start-up Nation, his 17th in all, well familiar with a lot of the mountainous terrain of the north (he lives in Andorra) and also eying up a stage win, his last in the Vuelta coming nine years ago, when he was first to the Stage 9 finish at the La Covatilla resort in the mountains of Salamanca.

“The season has been non-stop for me since the restart, but I’ve always had the Vuelta in the back of my mind, especially after my injury just before the Tour,” said Martin. “There are a lot of stages that suit me, I’m feeling good, and would love to get a stage win and then see what we can do on the GC.”

There’ll be good company in that GC race, including defending champion Primoz Roglic (Jumbo-Visma), plus a fascinating duel, perhaps, between Ineos Grenadiers co-leaders Chris Froome and Richard Carapaz. Indeed like most things around this race it feels impossible to predict the winner.

After three opening stages in the pure hills and high mountains, this is the first properly flat stage for Sam Bennett and his company of sprinters to aim for. The first half of the stages goes mostly false flat downhill, with only moderate uphill sections, the second half races through the open plains northwest of Zaragoza, and while crosswinds could pose a threat, a bunch sprint looks inevitable. The green jersey chase is almost entirely dependent on stage finishes, which makes these sort of days critical for Bennett if he is to repeat his Tour de France heroics.

Summit finishes on the Tourmalet have a tendency to be epic, and on the final passage over the Pyrenees into France, the riders face the final haul up of 19km, average gradient sits at 7.4 per cent. It’s the only time the race leaves Spain, the mountain more familiar to the Tour, and Dan Martin knows this territory well and will fancy everything about this stage, a short 135.6km with no flat stretch of road in sight.

The second last properly flat stage before the finish in Madrid, but not quite straightforward either, taking in the flat but bumpy roads close to the Bay of Biscay. It has an unpredictable Classics look to it, and with 60km to go hits the crest of the Alto de San Cipriano, but most of the strong sprinters should be able to hold on, especially with the 10km perfectly level. There are some moderately hilly stages to come at Stage 15 and Stage 16, but for a stage win this could be Bennett’s last chance before Madrid.

The last opportunity for riders to either move up or shake up the GC, with five intermediate climbs before the last 9.8km go up at 7.1 per cent to the ski station at Alto de La Covatilla. It’s a relentless stage that will test the strength and will of all the sprinters left in the race at this stage, but with the hope and ally of that flat finish in Madrid just 24 hours later.

A typical end of Grand Tour stage, starting at the racecourse at the Hipódromo de la Zarzuela, on the outskirts of Madrid, and finishing with the 5.8km circuits of the city centre, Bennett well familiar with this sort of racing too given he finished second here last year to Fabio Jakobsen. Still it feels a long way off and in more ways than one.