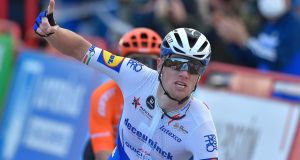 Sam Bennett celebrates as he crosses the finish line to win stage 4 of the Vuelta from Garray to Ejea de los Caballeros. Photograph: Ander Gillenea/AFP via Getty Images

For a moment it seemed an unreasonable and possibly unfair ask and then Sam Bennett pointed his handlebars straight as a cannonball towards the finish line, and with that landed back-to-back stage wins for two different Irish riders for the first time in Grand Tour cycling history. And that goes back a long way.

After three opening days in the mountains, everything about the Stage 4 finish of the Vuelta a España into the town Ejea de los Caballeros had Bennett’s name written all over it, only he still had to deliver and time his final sprint to perfection, which he just about did, finishing like that proverbial cannonball to take the win and knock the wind out of Jasper Philipsen, the young Belgian rider from UAE Team Emirates.

So, fresh on the wheels of Dan Martin’s Stage 3 win on the summit finish at La Laguna Negra on Thursday, it marks the first time in Irish cycling history that two different riders have won back-to-back stages in any Grand Tour, although Seán Kelly did take two opening individual stage wins back-to-back in the 1980 Vuelta.

For Bennett, who last month became the first Irish green jersey winner in the Tour de France since Kelly in 1989, it’s also Grand Tour stage win number eight in all – to go with his two in the Tour this year, including the last stage on the Champs-Élysées, two in the Vuelta last year, and three in the 2018 Giro d’Italia, with a few runner-up positions too.

Anything else? Having already equalled Shay Elliott’s unique feat of winning stages in all three Grand Tours – a feat neither Kelly nor Stephen Roche ever managed – Bennett also equals Elliott’s 1963 feat of winning a stage in the Tour de France and the Vuelta in the same season.

No wonder it felt a little unreasonable, especially as the flat, partly downhill finish included two tricky corners. Bennett himself described it as a little “sketchy”, especially as Philipsen looked to have got the jump off the final corner, before Bennett blow him away over line, raising his right arm in triumph, Philipsen’s head already down in the moment of surrender.

His final sprint was clocked at just over 80kph, Bennett’s team Deceuninck-Quick Step doing much of the driving off the front after the peloton was brought back together going into the final 10km, but Philipsen certainly made sure worked for it all the way to the line, Bennett’s former team mate at Bora-Hansgrohe Pascal Ackermann ending up fourth,

“On the last left hander, it [the road], looked a bit dirty, we didn’t know how much grip there was. I wanted to go on the outside, Jasper Philipsen got the jump on the inside, and I really didn’t think I was going to catch him, but I started getting more and more speed towards the end, was still accelerating towards the line, so I had the power, but . But when he initially went, he was explosive around the corner that I didn’t know if I could catch him.”

Martin finished the day safely in the main peloton just behind, the Israel Start-Up Nation rider back in 27th place, and in the same time as Bennett, and still trails Primoz Roglic, team Jumbo-Visma’s defending champion from Slovenia, by just a mere five seconds, with Richard Carapaz, the Ecuadorian rider from team Ineos Grenadiers, still sitting in third, 13 seconds back, and still the leading of the king of the mountains classification.

The second half of the stage crossed the open plains northwest of Zaragoza, where the crosswinds at times posed a threat, yet a bunch sprint always looked inevitable, with Bennett always poised to make his first press for a stage win.

Martin will again wear the green jersey on Stage 5, as Roglic continues to wear red as the overall leader, but the 20 points for the stage win moves Bennett into sixth, on 25 points – the problem for him being there are only three more properly flat stages to come.

Indeed the two weekend stages head straight back into the mountains, Saturday’s Stage 5 played out in the foothills of the Pyrenees, which does at least have a downhill finish, before Sunday’s stage 6 to the Col du Tourmalet, the only time the race leaves Spain, and terrain Martin also knows well, a relatively short 135.6km but no flat stretch of road in sight.

The next flat stages come on Stage 9 and Stage 10, next Thursday and Friday, then the final Stage 18 finish in Madrid. Unfair to ask of Bennett again?