Netflix is entertaining, but there is something about sport that gets under your skin 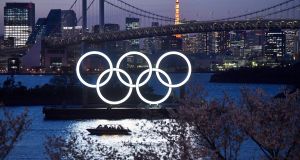 We are still living in hope and dreaming. Dreaming that the Tokyo Olympics will still take place just over a year from now. Photograph: Carl Court/Getty Images

“Live like a clock.” Those wise old words of running coach Jumbo Elliot were passed down from running team to team at Villanova over the years. Give some purpose to your day, some routine, even if it feels like you’re doing the same thing over and over again.

A bit like Groundhog Day, except that you have to set out your own rules, some parameters to start and finish the day. Most athletes always thought they were good at that.

I try to get up most days at 7:30am. There are certain things that will always be the same anyway. The morning ritual: half a lemon squeezed in hot water with a dash of echinacea and goldenseal, my small anti-viral potion that maybe was becoming more habitual but enough to believe it boosts my immune system throughout the year.

This is followed up by the coffee home-brew ritual. Currently my favourite method is the V60 filter method: this is slow coffee at its best, all measured, beans hand-ground and timed to perfection for just one cup. That I always enjoy with a little bowl of home-made muesli.

Health has always been important to me, and feeling good. I do everything I can to avoid illness. I just never realised how easy it can be to be infected by just going through normal daily activities: in the gym, at the shop, at the petrol pump, and I can’t even think about at an airport and in an airplane. Not when I think twice now before touching anything.

As things start to return to normal I am still watching the spacing marks on the supermarket floor. As I move up one space I can’t help but feel the person behind is not on their dot, getting too close. So I edge forward and they follow me, still too close. Some things are definitely returning to normal.

Even the self-serve touch screens are not being wiped down between every customer. Maybe I’ll have to bring my own wipes next time, along with the hand sanitiser in my pocket.

I do wonder how I was never so particular about this when competing, at that peak fitness, so often right on the cliff edge, where the slightest little thing could throw you right off. And sometimes did.

This could be a good thing for the future of sport, and the athlete’s awareness of proper hand hygiene throughout the day, every day. It could also lead to a whole generation of strangely overly-paranoid people.

Sometimes we all feel invincible until reminded of our vulnerabilities, and how easy we can be stopped in our tracks. Nothing has been like the road block that is Covid-19. We started in March with so much hope, then so quickly there was so little of it as event after event got cancelled.

We are still living in hope and dreaming. Dreaming that the Tokyo Olympics will still take place just over a year from now, the Olympic dream that for so many could still become a reality in 2021. Otherwise that’s a lot dreams dashed.

Whether you are an athlete, a supporter, a commentator, a volunteer, 2020 has been thrown into disarray, plans thrown out the window.

Instead we are forced to stay at home, fill our days with reading books and Netflix. I’ve never really been much of a daytime reader, and the television is rarely on until after dinner. Maybe for some sport in the afternoon, but even that has been taken away.

The other constant in my day has been the daily bout of exercise; running, cycling, home gym, sometimes a few hours on the Elliptigo bike, best when combining a trip to a faraway bakery or coffee shop to restock and tick the daily activity box.

My favourite part of this whole lockdown time has been the ability to be creative in the kitchen, taking my time, slow-cooking. Toasting oats on a Thursday for the weekly batch of muesli, pizza from scratch on a Friday. There is nothing more satisfying than following a simple recipe, step by step, the ingredient list giving some added purpose at the shops.

If there is no end in sight the same weekly routine allows the weeks to go by quickly – every day and week and month runs into each other. As all the adventures have been curtailed, I now find myself sitting at the table looking out at the rain. It is the end of summer Down Under, autumn leaves falling and cold dark winter evenings setting in. Where has all the time gone?

I long for the European summer athletics meets. Netflix is getting old now. I’ve gone through the recommended list –The Stranger, Unorthodox, Safe, The Sinner, Money Heist – and they all took me away from the lack of a European athletics season for a short while. It just wasn’t that same anticipation you get for an athletics meeting. Entertaining, but there is something about sport that gets under your skin – the anticipation and adrenaline.

Then there was a strange feeling when watching The Last Dance, The English Game, Sunderland ‘til I Die. It wasn’t just the sport and the competition, but the passion from the fans. It took on a whole different perspective when you think about the future and wonder will things ever be the same again, the crowds all cheering as one, as if the spontaneity and natural instinct has been taken away.

The luxury of stopping for a coffee while out for a bike ride is now more of a secret, a socially-distanced huddle on a park bench or standing under a big tree.

We also had our phase of hot cross buns, the giant blueberry scones, the banana bread and the failed attempt at sourdough.

And not forgetting the 1,000-piece jigsaw puzzle map of Melbourne that kept us on our knees around the coffee table for at least a week.

You wonder about it all, how we are connected like never before. Yet when you go outside and meet people after three months of lockdown you have to adapt to the new socially-distant level of communication.

A bit like at the start of all this way back in March when I attended a pre-St Patrick’s Day lunch in the city, then a lecture at Melbourne University the following night, followed by dinner and a house concert where over 30 people were packed into a living room to listen to Eleanor McEvoy on the backyard deck. A world away from where we are now, I can remember trying to keep my hands in my pockets, reluctantly accepting a hug or an awkward handshake.

Yet maybe a return to sport as we used to know it can be a way of leaving all that behind. That instinctive emotional reaction may just allow us to once again relax and be fearless in a packed stadium.

1 Monica Seles: The warrior queen who could have been the best ever
2 Donnacha O’Brien takes first Classic as Fancy Blue wins French Oaks
3 Marcus Rashford ‘blessed’ to be fit again and back in the goals
4 Valtteri Bottas takes Austrian Grand Prix as Lewis Hamilton is demoted to fourth
5 Séamus Power huffs and puffs as Wolff blows the door down in Detroit
Real news has value SUBSCRIBE