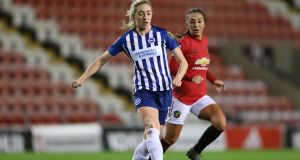 Fresh from the Super League game on Sunday in which Brighton had defied both the odds and a second half Manchester City onslaught, Megan Connolly was in upbeat form about Ireland’s prospects away to Germany this weekend.

Having scored from distance last week in the 2-0 win over Birmingham, the 23-year-old from Cork played the first half for Brighton at City before making way for recent arrival Denise O’Sullivan who had a big hand in the stubborn second half display that kept City’s all-star lineup at bay.

Brighton boss, Hope Powell, observed afterwards that: “If you do your job well, execute the game-plan well, you give yourself the best possible chance. It was not about playing the name but the moment.”

Unsurprisingly, Connolly sees it as a sentiment that can be usefully brought into this first of two European qualifiers against eight time tournament champions whose recent form suggests they are anxious to add title number nine.

“It was a great result for us,” says the midfielder. “It was a kind of a game where our backs were against the wall. City were on top of us in the second half, kind of on us, but it was a case of showing belief in each other; the trust that ‘right, the person to my right, the person to my left, she’s gonna do her job. So I’m gonna do my job the best I can.’

“And that’s all you can do really, you know. You can step on the field and just give 100% of what you have. I think going into the game on Saturday we’re underdogs but that’s what we want to do then as well.”

Ireland’s record against the Germans – four games, four defeats – may not be hugely encouraging and Martina Voss-Tecklenburg’s side have been in really blistering form so far in this qualification campaign, scoring 31 goals without reply in four games to date, but Connolly and co have got themselves into such a strong position to finish second that they can view anything really this weekend as a bonus that would bring them closer to earning one of the three automatic qualifying spots available to the best of nine runners up.

“We want to go out there have a good performance, make everyone proud and come away with something,” she says. “I don’t think there’s any belief that we’re just going to go there, lay down and let the Germans kind of walk all over us. That’s not an on anybody’s mind.

“You can’t go into a game against the Germans and think: ‘Right, we’re just going to kind of hope for the best.’ You’ve got to go out there and feel you have something about you.”

Asked if the positivity extends to believing that there might be three points there for the taking, she cautions against getting carried away.

“Obviously,” she says, “we want to get a win but you have to be realistic. And I think for us against a team of that standard… I would take a draw.”

There is, she points out, a precedent in the form of the scoreless draw achieved away to Netherlands in the last qualification campaign.

“We’re going to prepare as best we can and then I think it’s about having trust in the staff and the players around us; knowing that everyone is on the same page. That was how it was with the Dutch game. There was a plan and everyone bought into it.”

Injuries have kept Connolly out of the last three qualifiers during which time her new Brighton teammate O’Sullivan has played an absolutely key part in maintaining Ireland’s push for a first ever spot at a major championship.

Seeing her fellow Corkwoman up close over the past few weeks has made it clearer than ever to Connolly how important O’Sullivan is to the team.

“I think if you saw the second half yesterday, you can see she was in positions, many times, that saved us… positions to block a pass that we needed. I think we saw she is someone you can always rely on.”

If there is anything to be brought back from Essen then every Irish player is going to raise their game to that sort of level but there is the strong sense, at least, that the team has no intention of heading away to simply make up the numbers.