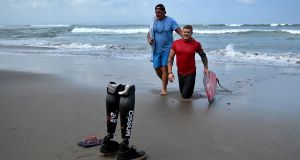 Jade Wheatley from Australia taking part in the Bali Adaptive Pro, an international contest for surfers with disabilities, at Canggu beach on Indonesia’s resort island in September, 2019. Photograph: Sonny Tumbelaka/AFP via Getty Images

Sometimes I hate filling this column with personal ramblings because, let’s be real, nobody cares. But in a year filled with confusion, distress and craziness, we should applaud ourselves when we achieve our goals, no matter how minor they may be. For me, I managed to tick off a long-standing bucket list item I wasn’t sure I’d be able to do . . . ever!

On a spontaneous trip to Lahinch, I decided to put my best yoga body to work and sign up for a surfing lesson. I know, a girl with no limbs riding a surfboard and catching waves. The biggest wave I unofficially caught was about 6ft, but it was hard to judge considering my main surf pose was belly flat, face down while a pal brings me to the wave. In high technical surfing terms, I hold on tight, they do all the work.

But, I wanted to mix it up with the big boys and head to a renowned surf spot that all the international surfers visit. I was inspired by Easkey Britton after featuring with her on an ad for Oxfam. She was someone who always defied expectations.

Long story short, I signed up with Ben’s Surf School after Google told me he was the man. Once I’d rang and explained the situation I’m sure Ben thought it was either a joke or a possible death wish. But, after a few hits and misses, we started catching mini waves with me standing upright. The rush of adrenaline was addictive.

I had to find out more about surfing and if there were possible adaptations or an adaptive surfing group I could possibly liaise with and see what type of disabled surfers were possibly out there. I knew that at some stage the world’s top surfers will celebrate their sport’s Olympic debut by competing on Japan’s spectacular Pacific coastline, whenever Covid-19 allows the Tokyo Olympics to go ahead. Surely, if it was an Olympic sport, it would be included in the Paralympic schedule? The ISA has petitioned all the relevant committees to include it in the Paris 2024 schedule.

Adaptive surfing is actually a competitive championship across the board, currently under the International Surfing Association (ISA). In fact, on their website it states “in line with our mission to develop the sport of Surfing in all of its forms across the globe, the International Surfing Association has taken an active role in the development and advancement of Adaptive Surfing to create a global platform for universal access to the sport and enable Adaptive Surfers the opportunity to achieve sporting excellence and inspire others”.

So far, the ISA took on the umbrella term Para surfing and has professionalised it with the help of experts, athletes and those living with a disability, adding in classifications, official tournaments and a general attitude that this is a competitive and entertaining sport.

As well as the competitive angle, surfing also provides therapeutic refuge for those who have acquired disabilities, and in America, in particular, California, soldiers who have returned from the war in the Middle East have taken to the water to help with PTSD and re-acceptance into life as they know it.

In fact, more than 30 countries have adaptive surf programs, geared to those with disabilities, be it mental, intellectual, or physical. In Ireland, there are a few surf schools who cater for participants, such as Freedom Surf School in Waterford and Liquid Therapy in Donegal. Scattered around there are non-profits who also cater to those with a variety of disabilities, like autism, Downs Syndrome, limb loss and sight loss.

So, while catching mini waves in Lahinch, a bizarre thought (apart from don’t fall and plummet to your death) flashed through my brain, this surfing craic may be the outlet I’d need to get my adrenaline buzz as well as work harmoniously with the limited but fine-tuned attributes I may have.

Looking around Lahinch beach, I noticed that irrespective of people flailing around, getting up on a board, falling off the board, the general attitude and vibe was how happy and buzzed everyone was to be out catching waves and throwing themselves around into the sea.

The most amazing part was seeing the reactions of those who see my limitations on land and who believe I, or many others, can’t partake in any activity. But, out in the water, up on that surfboard, catching waves, my limitations were non-existent. The power of the waves and the sea don’t discriminate based on your ability or gender. On the water, the only thing limiting you is yourself.