Sinéad Lynch ‘tempted’ to return to Ireland squad next year 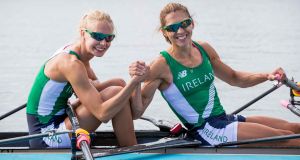 Sinéad Lynch does not believe in resting on her laurels. The Olympic finalist in the lightweight double sculls will be the guest of honour at the opening ceremony of the All-Ireland Coastal Rowing Championships at Ballyshannon in her native Donegal on Friday, August 18th.

The doctor and parent-of-three with husband Sam Lynch stepped aside from international rowing for the 2017 season. But she competed for her club, St Michael’s, this season and is clearly not lacking in fitness.

Lambe will be part of the Ireland squad again next season. Will Lynch also rejoin in 2018? She is “tempted” to trial for the season ahead, she told The Irish Times. Watch this space.

Next up for Ireland rowers in this extraordinary season is the European Under-23 Championships in Poland on September 2nd and 3rd. Ireland will send two crews: the men’s lightweight double of Niall Beggan of Commercial and Andrew Goff of UCD and a women’s eight. The eight will be stroked by Emily Hegarty of Skibbereen, and including the cox Cormac O'Connell, is made up from seven different clubs.

The team for the senior World Championships in Florida in September is being finalised. There will be trials in the coming week for a men’s pair (Patrick Boomer and Fionnán McQuillan Tolan) and a women’s pair (Aifric Keogh and Aileen Crowley).

The rest of the team will consist of the the crews which did the country proud on the international front this season. Monika Dukarska of Killorglin did remarkably well at World Cup regattas in the single sculls – but Sanita Puspure outperformed her and is set to be given the nod in this boat.

Ireland will not have a men’s single sculler, but the United States looks set to be represented by a 6ft 10in Boston man with Irish roots. Michael Clougher won the single sculls final at the US trials on Wednesday in New Jersey. Clougher is a second cousin of former Ireland Olympic rower Neville Maxwell, who is chair of the High Performance committee of Rowing Ireland.

Dukarska may not be off to Florida, but she has a new focus. She has twice won the solo (single) at the World Coastal Rowing Championships and is the reigning champion. She intends to defend her title at this year’s championships, in October in France.

Coastal rowing at the domestic level continues to thrive in terms of numbers. This year’s All-Ireland championships show the width of its appeal. Almost three thousand rowers are entered – 2,780 – as part of 500 crews.