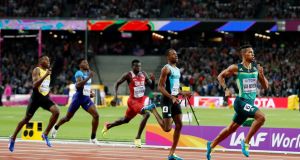 He’s already been dubbed the most complete sprinter in athletics history and Wayde van Niekerk continues to demonstrate why. In winning part one of his expected London double, the South African man didn’t so much run one lap of the track as tear it up.

Granted the opposition was weakened, his main rival Isaac Makwala from Botswana pulled from the race - not ruled out - due to the increasingly rampant vomiting bug. He may have made a closer a race of it; in truth van Niekerk was always going to win.

He’d time to ease up on the line, his 43.98 seconds well short of 43.03 he ran to win the Olympic title in Rio last summer: he’ll need that reserve to complete the 200m double on Thursday, with the semi-final to come this evening.

“It’s back to work tomorrow,” he said, looking suitably exhausted. Steven Gardiner of The Bahamas took silver in 44.41, bronze going to Abdalelah Haroun of Qatar in 44.48. Still Makwala’s absence was unfortunate, the IAAF insisting they had no option but to pull him from the race, refusing him entry to the stadium, despite his repeated efforts to get through.

As per UK health regulations, they said, it was requested that he be quarantined in his room for 48 hours, a period which ends tomorrow: “The IAAF is very sorry that the hard work and talent of Isaac Makwala won’t be on display tonight but we have to think of the welfare of all athletes. These procedures are recommended by Public Health England and were clearly explained to the teams in writing and in person to the Botswanan delegation.”

Not such worries for Pierre-Ambroise Bosse, who produced the performance of the night to win the 800m.

“Am I dreaming?” asked Bosse, not long after winning the race, as well he might have been: the big Frenchman could hardly believe he’d won the race and nor could his opposition, Bosse’s brilliant surge for home from 200m out carrying him to the finish in 1:44.67, his fastest this season.

Those lost in the chase were Nijel Amos from Botswana, the favourite, run into fifth, as the blue-eyed Adam Kszczot from Poland also finished like a rocket to win silver, Kenya’s Kipyegon Bett winning bronze.

Bosse was the deserving and popular winner, the 25 year-old known to enjoy a whiskey and cigar during the season. Even in the absence of defending champion David Rudisha it was another fantastic race.

Britain’s Kyle Langford also finished it like a chariot race, but just not fast enough - closing from seventh to fourth in the homestretch, missing out on a medal by .04, running a personal best of 1:45.25.

Kenya haven’t lost the 3,000m steeplechase at the World Championships in 30 years and they weren’t going to lose here either - Conseslus Kipruto kicking boldly from the front not long into the last lap, then cheekily holding off Soufianne Elbakkali from Morocco. His victory salute was suitably emphatic.

Hitting the front from four laps out, as expected, was the American Evan Jager, but there was no stopping Kipruto, who won Olympic gold in Rio last summer, his time here 8:14.12. Jager ended up third, Elbakkali well pleased with his silver.

4 Rhys McClenaghan: ‘It would be almost silly not to aim for gold every time’