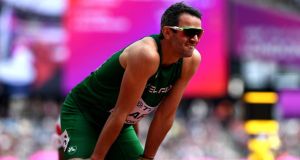 He certainly didn’t plan on going out like this – Thomas Barr forced to withdraw from his 400m semi-final of the World Championship on Monday night due to a vomiting bug.

After safely navigated his heat on Sunday, Barr suffered a bad bout of gastroenteritis overnight and with that was left with no choice but to make the difficult decision.

And he wasn’t alone either: according to the IAAF, several athletes also staying at the Irish team hotel at Tower Bridge were like Barr effectively quarantined after suffering from the illness:

“My whole year has been focused on the World Championships,” said Barr. “The support yesterday was just brilliant and to not be able to go out and compete today for Ireland is beyond disappointing.”

A statement from the IAAF confirmed other athletes had been struck down by the bug: “There have been a number of cases of gastroenteritis reported by team members residing within one of the official team hotels for the World Championships.

“Those affected have been supported by both team and LOC medical staff, in addition we have been working with Public Health England to ensure the situation is managed and contained.

“As a result, further advice and guidelines have been issued to team doctors and support staff – standard procedure for such an occurrence where a number of teams are occupying championship accommodation.”

There was no way Barr, if not 100 per cent right, could compete on this stage, not in a flat-out of race 400 metres, which includes 10 three-foot high hurdles and executed on a virtual tightrope.

The 25 year-old from Waterford, who finished fourth in last year’s Olympic final, had come to London as Ireland’s best chance of a finalist.