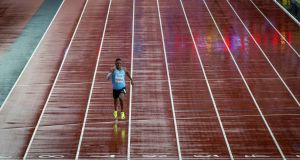 Isaac Makwala crosses the line in his solitary 200m heat at the World Championships in London. Photograph: Morgan Treacy/Inpho

The stadium was about half-full and the conditions dreadful but Isaac Makwala produced possibly the single-most outstanding performance of these World Athletics Championships.

Because in the race for some salvation from what Makwala called his “sabotaged” 400m final here last night, the Botswana athlete ran 20.20 seconds for 200m in a solo re-run of the heat he was forced to miss less than 48 hours ago due to the vomiting bug.

That was more than good enough to get him through to one of the three semi-finals, run later on Wednesday evening (8.55pm) - where he’ll be running in lane one of the first heat with the hope of making the final.

Though this is no ordinary athlete. Earlier this year the 30 year-old Makwala became the first athlete in history to run sub-20 for 200m and sub-44 for 400m on the same evening, his 19.77 personal best for 200m the fastest in the world this year.

Earlier this afternoon, the IAAF received a written request from the Botswanan federation to allow Makwala to compete in the 200m, having originally withdrawn from his heat on Monday due the vomiting bug.

He was then forbidden to run the 400m final last night, despite being one of the medal favourites, after the IAAF insisted he remained in quarantine. That race was won by Olympic champion Wayde van Nierkerk in 43.98. Makwala has a best of 43.84.

Now, van Nierkerk will likely need to beat Makwala too if his is to complete his double, should Makwala get through.

His solo run here suggests he will - Makwala running alone in lane seven, and despite the pouring rain and wet track, hit the line in 20.20, promptly celebrating by falling to the track and helping to five push-ups.

He had needed to run 20.53 or faster, which was the best of the fastest-loser qualifying times in Monday’s heats. While not ideal, at least it makes some amends for his treatment by the IAAF in recent days.

According to a statement; “Given his quarantine period expired at 14:00 hrs today (August 9th) and following a medical examination which has declared him fit to compete, we have agreed under our existing rules that assuming he makes the qualification time, he will run in the 200m semi-final round this evening.

“Makwala is required to run a time of 20.53 or faster to advance to the semi-finals. He will run at 18:40hrs this evening on his own in lane 7, which was his original lane draw in the opening round. No athletes already qualified for the semi-final will be adversely affected.”

After being forbidden to enter the stadium last night, Makwala told BBC Sport his “heart was breaking” and questioned how officials could know he was ill, without tests.

“How can they just look at you and see you are sick? If they had tested me I would not have that problem, but they just assumed. Usain Bolt is out now so the IAAF wants someone to be the face of athletics.”

However the IAAF replied: “There is nothing we want more than extraordinary competition in these championships. We freed up the competition schedule to allow this to happen, specifically between these two athletes by allowing the opportunity to double up at 200m and 400m.”

1 Andy Farrell hands Billy Burns first Ireland start against Georgia
2 ‘God is dead’: The world’s front pages remember Diego Maradona
3 Keith Duggan: Through the glories and the disgraces, we were all Maradona addicts
4 GAA Statistics: Can Cavan and Thomas Galligan beat Dublin with the long kickout?
5 Fans back in Liverpool and London next week but 10 Premier League clubs must wait
Real news has value SUBSCRIBE