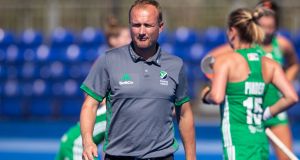 Graham Shaw is to leave Ireland to take up a role as coach to the New Zealand women’s hockey team. Photograph: Morgan Treacy/Inpho

It will be with “a heavy heart” that he and his family will leave Ireland, Graham Shaw told Hockey New Zealand’s website, and it’s likely that Hockey Ireland felt much the same way when they accepted the Dubliner’s shock resignation as coach of the national women’s team ahead of him taking up the same position with New Zealand.

Since being appointed Irish coach in the summer of 2015, Shaw guided the team from 16th to eighth in the world rankings, the high point that dizzying success in London last summer when Ireland reached the World Cup final.

But while his departure has come as a bolt from the blue, his stock as an international coach rocketed after London, and when Mark Hager resigned from his New Zealand post in January, taking over as coach of the British and English women’s teams, it was probably inevitable that Shaw would be tempted to apply for the more lucrative position – and one with a team, semi-finalists in Rio, with lofty Olympic ambitions.

And so it proved. Hockey NZ said they attracted “a high calibre of applicants”, their chief executive Ian Francis saying that Shaw “stood out as a coach who has a world-class tactical and technical hockey knowledge”. The job was his.

He takes over at a difficult time, though, the NZ squad bitterly divided over Hager’s style of management, reminiscent of the split in the Mayo women’s Gaelic football panel last year, some players supportive of him, others alleging ‘bullying’ behaviour during his 10 years in charge. An independent review recently apologised to those players who had “a poor experience in the environment” and promised that in future their concerns would be investigated.

Shaw, then, has some healing to do ahead of starting his new role on May 1st when New Zealand play the United States in Pennsylvania. But there’s no shortage of enthusiasm. “It is an absolute honour to be named as head coach of the New Zealand women, a team I have admired and respected for many years,” he said. “While we leave Ireland with a heavy heart, my family and I are delighted to move to your beautiful country, where we will start a new chapter in our lives.”

Ireland, meanwhile, will have to start a new chapter of their own in the absence of their inspirational coach, their focus this year firmly on qualifying for the 2020 Olympic Games; step one in that process the World Series tournament they are hosting this summer.

“To the players I would like to say a massive thank you,” said Shaw in his statement. “Your drive, dedication and loyalty has been relentless and it has been an absolute pleasure to lead the programme over the past four years.

“I would like to wish the squad all the best for the future. I hope you continue on this journey, inspiring the next generation of hockey players in Ireland and I hope to see you in Tokyo.”