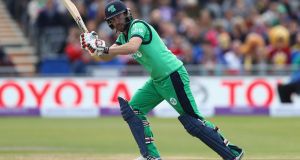 Andrew Balbirnie made 145 not out in Ireland’s four-wicket victory over Afghanistan in Dehradun, India. Photograph: Michael Steele/Getty Images

A sensational, record-breaking hundred from Andy Balbirnie helped Ireland chase down 257 in the third ODI against Afghanistan in Dehradun, India, levelling the series 1-1 with two games left to play.

Balbirnie’s innings began with his side in trouble at 13 for one, which soon became 29 for three as Dawlat Zadran and Mujeeb Ur Rahman pegged Ireland’s reply back early on. He received some support from Kevin O’Brien, but the game’s defining partnership was shared with George Dockrell.

The pair added 143 – Ireland’s second highest for the fifth wicket in ODIs – and though Dockrell fell with victory still 41 runs away, Balbirnie stayed strong, and in the company of Andy McBrine, guided Ireland to a famous victory.

For a time, it looked as if an Irish win would be a rather more comfortable affair, as Tim Murtagh and Ireland’s spinners combined to reduce their opponents to 74 for five. Murtagh claimed both openers, the first, Mohammad Shahzad leg-before with one which skidded on, and the second, the dangerous and in-form Hazratullah Zazai, who had already struck two sixes, with a direct hit from short fine leg.

In between, McBrine, who reprised his role as opening bowler, had Rahmat Shah leg-before, turning the ball a long way back in, before his spin counterparts, Dockrell and James Cameron-Dow, got in on the act, claiming a wicket apiece.

Cameron-Dow claimed his maiden international scalp by bowling Hashmatullah Shahidi off the inside edge, before Balbirnie took a superb catch at slip to send Samiullah Shinwari on his way.

Thereafter followed an excellent partnership of 117 between Afghanistan’s captain, Asghar Afghan, and Najibullah Zadran, who continued on to make his maiden ODI century. The landmark came up in the final over, emphasising the exemplary pacing of the knock. He accumulated 34 off his first 60 balls before accelerating, plundering 74 off his last 38, in which time he struck five sixes.

Boyd Rankin did his best to limit the damage, removing Afghan for 75 – cramped for room and caught at fine leg off a ramp shot – and Mohammad Nabi, caught behind.

Murtagh claimed Rashid Khan, who holed out to Simi Singh on the off-side boundary for eight, and though there was no stopping Najibullah’s fireworks, stemming the flow from the other end meant Ireland faced a chase of 257 to stay in with a chance of winning the series.

That still looked a long way off as Mujeeb pinned captain William Porterfield on the pads with one which kept low, before Dawlat’s double-strike set Ireland back further.

The in-form Paul Stirling had seemed set to make another big score, scoring freely early on, but mis-timed another attempted big shot to Afghan at mid-on, and Simi Singh fell three balls later, another LBW victim.

Balbirnie was forced to play out a maiden off Dawlat as Afghanistan looked to tighten the screws, but O’Brien helped loosen the shackles, punching Mujeeb for four before Balbirnie swept Ireland’s first six in the same over.

The pair smashed 16 runs off Shinwari’s second over, but the ball after striking his only six, O’Brien attempted to repeat the trick and only succeeded in giving mid-on a catch.

A period of calm was needed, and the next eight overs passed boundary-less. Dockrell outside-edged for four to bring the trend to an end, while Balbirnie was more authoritative, driving and pulling Dawlat for a pair of boundaries.

His 50 soon came up, followed by a moment of fortune, as he was dropped at the square leg fence, and dropped for six too. After that, there was no stopping him. He finished with eight sixes – an Irish record – including a definitive slog-sweep off Rashid.

Dockrell was game to play a supporting hand, but got in the act as the result neared, striking a six over long-on to bring up his 50, before coming down the track, missing, and being stumped at the second attempt. It brought to an end an eventful over, which also saw Balbirnie dropped at midwicket, and when Poynter holed out to deep square off Rashid in the next, the tension heightened.

Balbirnie however was nerveless, striking the bowling to all parts, a penultimate-over missed chance notwithstanding. With McBrine tucking singles at the other end, Ireland completed the chase with six balls remaining. Balbirnie’s 145 not out was Ireland’s third-highest ODI score of all time, and he ended with 55.77 per cent of his team’s runs.

“I can’t speak highly enough of Balbo’s knock, it was a phenomenal knock, to go out there and execute everything he’s been talking about doing and working on is great to see. And not just getting the hundred, but getting us over the line is great to see.

“We’ve had some very tightly contested series over the last while – the last time we played them in Sharjah we beat them 2-1, then in Ireland they beat us 2-1 – but we always have great character and bounce back, and will look at taking that into the next match.”

Balbirnie was delighted to play his part in a first win of the tour.

“Just for a morale boost for all the lads, it’s a long tour, so to get that win going in with two games to go is huge for the team.

“There was a couple of scary moments but you’ve got to take that risk as they have got world-class bowlers in their side. We haven’t had practice the last two days because of the weather, so it’s been more of a mental battle watching videos of their main threats with the ball – and to be able to counter it today, and play a knock like that, is very special for myself and the team.

“When you go out and bat, you dream of having that kind of knock, so to do it is just great. We’re a very close team at the moment, we’re in the hotel spending a lot of time with each other, so just to be able to get that win, we’ll enjoy that tonight, and we’ll go again tomorrow preparing for the next game.”

Ireland win by 4 wkts and level the series 1-1.