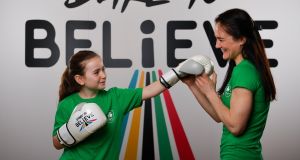 Kellie Harrington, Irish World Champion boxer, and Tilly Byrne-McGettigan, age 10, from Wicklow teamed up with the Olympic Federation of Ireland to launch Dare to Believe, a school activation programme championed and supported by the Athletes’ Commission. Photo: Seb Daly/Sportsfile

A project to promote understanding of Olympic sports to schoolchildren was launched on Monday by athletes in partnership with the Olympic Federation of Ireland.

The ‘Dare To Believe’ programme is training athletes to speak on the wider benefits of sport outside of competition. Thirteen elite athletes have signed up so far, covering different parts of Ireland. Teachers can register online at www.daretobelieve.ie to invite athletes to their school.

Founder Roisin McGettigan represented Ireland at the Beijing Olympics. She spoke at the time to local schools, but felt she wasn’t doing justice to her ideas. McGettigan said this project will help sportspeople share the benefits of what they do, saying:

“Athletes are so focused on the Olympic value of “striving for excellence” but there are all these other values we should talk about. I feel like the Olympics have gotten skewed, it’s all about medals. The reason people are cheating is because it’s all about medals, and when it’s about these rewards, these extrinsic rewards then people will cheat and break themselves to get there.

“But the rewards should be more intrinsic. And we should promote the benefits of sports and stories, not just about whether people get a medal or not.”

McGettigan came fourth in the 1,500m at the 2009 European Athletics Indoor Championships but was upgraded to bronze when the winner was disqualified. She is hoping this programme which includes Paralympic athletes can promote values like fair play to shift the focus from winning at all costs.

Peter Sherrard from the OFI said project development is supported by the International Olympic Committee Olympic Solidarity funding strand. Athletes will be paid for their time.

World champion boxer Kellie Harrington is already working with Dublin City Council to promote sport, and sees this role as an extension of that.

She said: “When Róisín told me about coming back from the Olympics, and she felt we needed help. I thought dead right, I definitely want to be part of that. It’s helping me to speak to the kids and try and get it across better.

“It’s a programme with all different types of athletes, all different sports and it’s open to so many kids. Between the ages of nine and 11 or 12, that’s when you want to be catching the kids. They’re like sponges, they absorb everything.”

Now an engineer in Cork, she said: “My message would be kids need to get involved in sport and find their sport. I would have played a lot of sport as a child, but I wasn’t good at them so it wasn’t really until I was 14 that I found something I enjoyed.

“Some of the Cork schools who might be more GAA-focused could have students who wouldn’t think of trying out for the rowing club.”

Lambe added: “I think it’s great the Olympic Federation is being more visible, I think this could help athletes with the transition out of sport. For me I can see a massive change from when it was the Olympic Council, and it feels like a more supportive organisation for athletes already.”