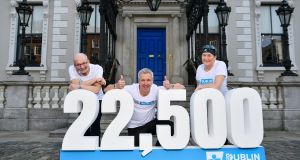 2019 is the 40th Year Anniversary of the Dublin Marathon with, from left, Frank Behan, the most senior, Martin Kelly, the youngest and Mary Nolan Hickey, the only female, to have competed in all 39 Dublin marathons since 1979 present at today’s announcement at the Mansion House in Dublin. Photo: David Fitzgerald/Sportsfile

Lucky number 13, or 2,500 – depending on who is counting. After demand fast outpaced supply, organisers of the KBC Dublin Marathon have added an extra 2,500 places for the October event, increasing the overall entry to another record high of 22,500.

There will also be a short window for entry returns, given the initial 20,000 limit sold out in just 40 days, back in early December, partly spurred by 2019 being the 40th anniversary of event. First staged in 1980 with an entry of 2,100, Dublin is now the fifth largest big city marathon in Europe.

At the announcement of the extended entry for the event, set for Sunday October 27th, were the 13 runners who have finished all 39 Dublin Marathons to date, with every intention of finishing number 40. Among them are Mary Nolan Hickey, the only woman to have finished all 39 so far, and Frank Behan, who turns 79 next month, and the oldest of those lucky 13.

For Jim Aughney, in his 22nd year as Dublin Marathon race director, the high demand for 2019 was both surprising and satisfying, the additional places given careful consideration: the four ‘wave’ or staggered starts will extend from 15 to 20 minutes apart, as the emphasis is still on quality over quantity.

“The extra 2,500 entries will open on the morning of Monday, July 1st, and we expect they might be gone within 24 hours,” said Aughney, who took over as race director in 1997, when numbers had dropped back to just under 3,000.

“But we didn’t just rock up to Dublin City Council and the Garda and say we need another 2,500 entries. We had to show them how exactly we would cope, and would cope safely, and the main way of doing that was to increase the break in the wave starts from 15 minutes to 20 minutes, spreading the 2,500 across the four waves, which won’t actually impact much on our peak at the start on Merrion Square, which is crucial for us.

“I’ve no doubt we could sell 25,000 entries, maybe more, but that would start to impact on quality, beginning with the race Expo, getting through the finish, all that. So we still have to control the numbers, and we’re happy with the 22,500.”

For a two-week period, from June 3rd to June 16th, anyone already entered can also request a refund (subject to 25 per cent service charge): “For the first time we’re also opening that window for a return entry, given the demand, and the fact some people may have entered back in November, and for whatever reason won’t be able to run,” added Aughney.

“We might get 10 returns, we might get 100, but whatever that number is will go straight back into that re-entry window on July 1st. For safety reasons, we don’t allow entries to be transferred to another name. That has to come through is, via a refund. We actually had a stand booked at the London Marathon in April to help sell the event, so a least now we have those extra 2,500 places to promote.”

In 2016 the event was moved from its traditional Bank Holiday Monday to the Sunday, which Aughney said directly contributed to the first sell-out of runners of 19,500, a 30 per cent increase on 2015. “We’d a few lucky breaks along the way since 1997, and thankfully numbers have been on the increase ever since,” said Aughney.

By 1982, the third Dublin marathon drew 11,076 entries; this year’s race will also mark the first of the new three-year sponsorship with KBC Bank.