Mark English and Ciara Mageean both take bronze in Glasgow 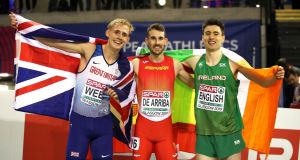 Holding on, hanging in, digging deep, Mark English has won himself another medal over 800 metres at the European Indoor Championships, taking third after a typically thrilling and hard-fought race.

Another English medal, for the Irish, on Scottish ground – surely written in there somewhere.

Looking to improve on the silver medal won in Prague four years ago, English went into the seven-man final with a little extra incentive to make the most of it.

Victory went to Alvaro de Arriba, one of the Spanish duo and a big kicker, in 1:46.83, with Britain’s Jamie Webb taking silver in a new personal best of 1:47.13.

But English was always intent on getting himself into that medal spot - never drifting outside the top three, finishing a close third in 1:47.39. The other Spaniard Mariano Garcia was fourth 1:47.58.

English was only added to the field after appealing his semi-final result on Saturday night, where he was obstructed by Britain’s by Britain’s Guy Learmonth, who had fallen onto the track, and not long afterwards was disqualified by the track judges for obstruction.

They’ve likened this event to the killing zone – the last strides of 800 metres racing taking the body to such a state of oxygen deprivation it can feel like a case of the bends. Or like swimming in a sea of lactic – and English certainly finished like that, giving it his all to hand on to bronze, gently punching the air to reflect his satisfaction.

The tactical element often doubles along with the number of laps in indoor 800m running, and English needed to put all his experience to full use. The 25-year-old medical student at UCD did exactly that, getting our fast onto the tail of Sweden’s Andreas Kramer, silver medal outdoors in Berlin last summer, the fastest in the seven man field.

That set the tone for the race, English’s bronze now making it the 24th in all won by Irish athletes, beginning with Maeve Kyle back in 1966 (including the European Indoor Games). David Gillick over 400m and Derval O’Rourke over the 60m hurdles were the last to win two medals.

What happened the previous two times English made a championships 800 metres final – and in quick succession – was that he also won a medal, outdoor bronze in 2014 and then silver outdoors in 2015, beginning an upward trajectory which began with his schoolboy days in Donegal. On the evening like this bronze felt every bit as good as any colour.

And making it a sort of double Scotch bronze for the Irish, Ciara Mageean came out in her the 1,500m final and also took third place, only this time passed for silver when the fast-finishing Sofia Ennaoui from Poland came back her to snatch second, just a stride ahead.

Victory here went to local favourite Laura Muir, who dictated the race throughout and won from the front in 4:05.92. Only it was Mageean who led the chase on the final lap, surging into second as the bell lap approached and already it seemed safe of a medal.

Coming round the final bend Ennaoui found a little more in reserve to come again, taking silver in 4:09.30 to Mageean’s 4:09.43. Still it was a brilliant effort by the 26 year-old Down woman, adding to her bronze medal already won outdoors at the European Championships in Amsterdam in 2016.

For Muir it completed a Scotch double of the rare sort, having won the 3,000m on Saturday night.