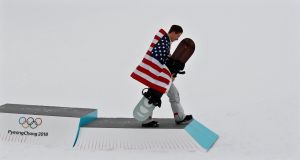 Shaun White of the USA leaves the podium after his win. Photograph: EPA

On the surface Shaun White’s redemption song, a four-year fightback from rock bottom that culminated on Wednesday morning with his third Olympic gold medal in the snowboard halfpipe, is as deeply satisfying a story as you’ll find at these Winter Olympics.

“It was a deja vu situation to the Sochi Olympics (where White finished fourth after starting as overwhelming favourite),” he said after yesterday’s victory. “I’m so thankful that I got to stand there again and know who I am, and know that I can do, and do that run to win it. It’s so rare that you get these opportunities to redeem yourself in life and in your career and I took advantage of that.”

There are few things more precious in life than a second chance and to watch White make the most of his was the type of moment that makes the Olympics for all their problems worthwhile. Which makes White’s elusive and oblique response later on Wednesday afternoon to the sexual assault allegations that resurfaced this week all the more disheartening.

Two years ago Lena Zawaideh, a former drummer in White’s electronic rock band Bad Things, sued the snowboarder over sexual harassment, bad business practises and failure to pay wages. The amended complaint claims, among other things, that “White stuck his hands down his pants, approached Zawaideh, and stuck his hands in her face trying to make her smell them” and that White “used his role to impose a strict regime over Zawaideh, going so far as to demand that she cut her hair, wear sexually revealing clothes and underwear, and refrain from wearing red lipstick”.

White vehemently denied Zawaideh’s allegations, though he did admit sending the series of sexually explicit text messages included in the complaint, helpfully excerpted by Deadspin. At best it’s a bad look. After months of legal jockeying the parties settled out of court in May of last year and any memory of the allegations, and lawsuit went wherever these things went before the #MeToo awakening of the last couple of months.

But they’ve bubbled to the surface once more since New York magazine raised them last week during the run-up to the snowboarder’s return to the spotlight. A few days later White’s hometown paper ran a story casting the lawsuit as one of the “obstacles” overcome by White during his road to Pyeongchang, alongside his injuries and the rising tide of younger competitors. Eek.

That led to a tense press conference on Wednesday afternoon when White briefly fielded a question from an ABC News reporter on the allegations - “Honestly, I’m here to talk about the Olympics, not gossip,” he said - before US snowboarding press officer Nick Alexakos shut down a series of follow-up attempts from multiple reporters. “We’re here to talk about the gold medal and the amazing day we had today,” Alexakos said repeatedly, before ultimately taking over and feeding White softballs himself. (“State-run media,” one writer grimly whispered.)

To be clear White is under no obligation to comment on a closed legal matter, not least hours after putting down the run of his life in a moment that will likely define his professional career and Olympic legacy. And besides, his boosters will tell you, Shaun White is likeable. No one wants the erstwhile Flying Tomato to be a lowkey garbage person. But evading these types of questions - which was maybe something athletes could have gotten away with in the past - simply won’t fly in the current climate.

By hiding behind press officers and dismissing the allegations as “gossip” - a choice of verbiage he quickly walked back in an interview on NBC’s Today show - White only invites more scrutiny and runs the risk of allowing a regrettable episode to define at the very least the wholesome public image he’s spent years cultivating, one that’s brought him untold riches through lucrative sponsorships and prompted NBC to front their billion-dollar investment in the Olympics with a glitzy Super Bowl commercial ordaining him as “the best of US”.

The choice is his. He can either live out life as one of the dozens of Olympic gold medallists who have their moment on the podium and fade back in to anonymity as private citizens. Or he can continue to reap the financial and social rewards bestowed upon a select few and address an episode that might have remained buried if not for a reckoning in American life no one could have imagined even this time last year, let alone when he soared to international fame more than a decade ago in Torino. The former seems unlikely.

White is already talking about competing in skateboarding, an event set to debut at the 2020 Tokyo Olympics, where a bid to become only the sixth athlete ever to win medals at both the Summer and Winter Games would be catnip for NBC. Nor does it sound, to hear both White and his rivals speculate in Wednesday’s aftermath, like a run for Beijing 2022 and a fifth Winter Olympics appearance is out of the question.

Now another shot at redemption awaits as he goes through NBC’s post-Olympics car wash over the next week. The cocktail of silence and time was once a safe bet to make these things go away. Maybe in the world of sports, which has largely evaded the crosshairs of #MeToo so far, it still is. But White may just find that gamble today is a losing proposition. Guardian Service