Chris Froome insists he has played by the rules

Team Sky cyclist Chris Froome says he has not broken any rules following a positive test for excessive levels of the asthma drug Salbutamol at this year's Vuelta a Espana. Video: Reuters 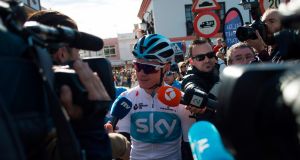 Chris Froome talks to the media prior to the first stage of the “Ruta del Sol”. Photograph: Getty Images

Chris Froome insists he has “done nothing wrong” and has defended his decision to return to racing at the Ruta del Sol.

The four-time Tour de France winner is still fighting to prove his innocence after returning an adverse analytical finding for asthma drug salbutamol during last year’s La Vuelta — a race he won in an historic Tour-Vuelta double.

Several rivals, as well as UCI president David Lappartient, have called for Froome to be suspended by Team Sky until the case is resolved.

But the 32-year-old will race on, adamant he will clear his name. He began his 2018 season when the Ruta del Sol got under way in the Spanish town of Mijas on Wednesday — his first race since taking bronze in the individual time trial at the Road World Championships in Norway on September 20th.

Speaking before the start, Froome told Sky Sports News: “I know I’ve done nothing wrong and there’s a process in place for me to be able to demonstrate that, and that’s obviously what I intend to do.

“It is not going to go any faster if I was sitting at home. We’re going as fast as we can on it now and hopefully we’ll get a result as soon as possible.”

Froome also said, according to The Times: “Obviously it was meant to be a confidential process. It has been made public now but a lot of other athletes and riders have been through this process. I’m not asking for the benefit of the doubt here; I’m just asking for a fair process.”

Team Sky general manager Dave Brailsford insists Froome “stuck within the rules” regarding the use of his inhaler.

“Let’s keep a bit of perspective here; what we’re talking about is an inhaler,” Brailsford told Sky Sports News. “It’s a puffer. How many times is he allowed to use his puffer? You’re allowed to use it 16 times in 24 hours and of course the question here is, ‘Did he use it more than that?’.

“If that does happen, the rules are around the number of times of use and I can guarantee you he hasn’t gone over the use.

“We do need to get to the bottom of it, we do need to understand it, but it is not this great calamity of a doping story which people are trying to make out. It is a pretty straightforward scenario.

“Going forward I’m sure we’ll be able to demonstrate to everybody that he absolutely stuck within the rules.”