Volvo Ocean Race Diary part 11: Getting to sleep is a problem, but getting wet is guaranteed

Seven days in, I still have a love-hate relationship with ocean racing 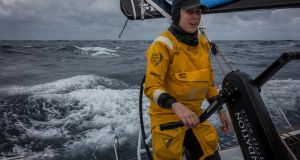 I am now a new person.

After six days wearing the same thermal underlayer, I’ve switched to my next dry set and the difference is amazing – you know things are bad when you can’t stand the smell of yourself.

My outer-layer wet-weather gear has probably done one leg too many as I’ve been wetter inside than out since we departed Hong Kong for Auckland last Wednesday on Leg 6 of the Volvo Ocean Race.

Our start in Hong Kong’s Victoria Harbour was less than ideal as we were late for the start and then missed a bunch of windshifts getting out into the Laos Straits.

Once out of Hong Kong we quickly peeled (its called peeling because we put up the new sail and deploy it before taking down the old one to minimise speed loss) to our J1 which is our main upwind jib.

We then spent much of the next two days getting battered by big seas heading upwind to pass just under Taiwan, so it’s been very wet on deck.

I have been working hard onboard and throwing myself into whatever I can do, which includes helping on the bow during sail changes. Everyone else finds it pretty funny seeing me up there as I am not comfortable being a bow woman, but I am trying new things and sure, it’s always good to get hosed in the face with water every now and again.

I was pretty happy I took all my seasickness medication as I wouldn’t have made it without it, especially with some of the jobs to be done below decks in our wildly pitching 65ft boat.

We have a small leak in our bow so twice I took it upon myself to go forward and bail it out. Both times I think I nearly died as I spent more time airborne in the tiny bow compartment than on the cabin floor.

Half the time, the half-full bucket of water would fly out of control as the boat pitched about and I would have to start again. The first trip took eight buckets to empty the bow but the second only three.

Seven days into this leg and I definitely still have a love-hate relationship with ocean racing: at times I love it and then other times I really wonder why the hell am I here. But after the Hong Kong stopover I now understand this to be part of extended life at sea.

I had a really great time in Hong Kong and China but I knew I couldn’t stay there forever and I was actually pretty excited leaving Hong Kong to start our race to New Zealand.

I think it mainly is the promise of plenty of good coffees from my Rio training partner and very good friend Sara Winther, who is an Auckland native and has already said she will come to the dock bearing baked goods at whatever time we arrive.

But the upwind conditions have made rest next to impossible and I think I probably haven’t slept for 28 hours now bar a couple of 30-minute naps. I’m completely exhausted but can’t get to sleep, so I am listening to the Spotify playlist Brain Food to try make me a bit sleepy.

I also have downloaded the audio book of Fire and Fury which I might resort to next if I don’t manage to sleep.

As far as the race itself goes, the fleet of six boats has split in two.

We chose what looked like the best routing and followed Mapfre, Dongfeng and Brunel to the east while Scallywag and AkzoNobel went on a more northern route.

It is pretty frustrating going from being in the leading group to being last again, but we still have a very, very long way to go

Overnight, however, we went from being in third place and a steady 15-ish miles behind the leaders to directly beside them, and then we all stopped in an area of no wind at the end of the cloud front and before the start of the trade winds.

We sailed within one mile of the leading boats for most of the night before taking a more easterly route with Brunel.

Now we see that AkzoNobel and Scallywag’s big risk has paid off and they were well ahead of us in the second group.

It is pretty frustrating going from being in the leading group to being last again, but we still have a very, very long way to go. We have about four days of trade winds ahead, which unfortunately is upwind so not that fast, but it will be windy so back to being wet again.

Then there is the equator crossing – my third in four months - then navigating the doldrums followed by some more upwind to Auckland. I think I have another two weeks or so before we get there so I just have to keep being positive and think of the coffees.