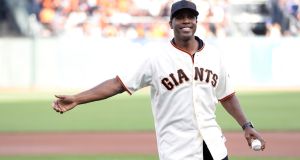 Barry Bonds: In the pantheon of chemical cheats, the former San Francisco Giants player is regarded as up there with the greatest in any sport. Photograph: Harry How/Getty Images

With much fanfare, the San Francisco Giants have announced their intention to retire the number 25 shirt once worn by Barry Bonds.

The ultimate accolade in American sport, the ceremony will take place before a game against the Pittsburgh Pirates in August, and the first 20,000 fans into AT&T Park that day will receive free commemorative hats bearing the number of the most notorious cheat in baseball history.

Imagine the Tour de France giving away complimentary US Postal gear from the Lance Armstrong era prior to the start of a stage this summer and you go some way to realizing just how wrong-headed an enterprise this is.

“I’m both honoured and humbled that the Giants are going to retire my number this season,” said Bonds. “As I’ve always said, the Giants and Giants’ fans are a part of my family.”

A very dysfunctional family with a rather warped set of values. Remember, when Bonds hit 73 home runs to set a new single-season record in 2001, he was helped by “the cream” and “the clear”, a pair of designer steroids from the infamous BALCO laboratory.

His preternatural ability to dispatch pitches over the outfield walls that season, and throughout his late 30s, was also assisted by a cocktail of insulin, human growth hormone, testosterone decanoate, and trenbolone, a substance more usually given to cattle being artificially enlarged for the market.

In the pantheon of chemical cheats, he’s regarded as up there with the greatest in any sport. Except in the city he lit up for 15 summers apparently.

His legion of apologists, a growing constituency, have plenty of material with which to make their case. Why shouldn’t he be honoured?

“For years after Bonds’ forced retirement in 2007, the Giants had to choose between what was right for Bonds and the fans who stream into AT&T Park, and what was right for the sport,” wrote Henry Schulman in the San Francisco Chronicle.

“By retiring Bonds’ 25, the organisation is declaring that the people of San Francisco and one of their most beloved sports figures deserve the final word.”

Simple translation. They know it’s wrong. They know he was a fraud. They don’t care. Never really have and surely never will now.

Even in a country whose increasingly laissez-faire approach to steroid use by athletes continues to baffle, the Giants’ attempt to gloss over the fact that every wondrous Bonds’ feat in their colours (including breaking the record for most home runs in a career) was chemically tainted is impressively brazen. It’s also a blatant attempt to enhance his future prospects of reaching baseball’s vaunted Hall of Fame in Cooperstown.

In his sixth year on the ballot for that recognition, he polled 56.4 per cent of votes from the Baseball Writers’ Association of America (BWAA). He has four more chances to reach the entry threshold of 75 per cent and the Giants’ retiring his number is bound to bring a fresh veneer of respectability to a tainted candidacy.

Between that and the fact new, younger members of the BWAA are almost unanimous in voting in his favour, chances are Bonds will be inducted sooner rather than later. And, it should be pointed out, most fans will be perfectly fine about that too.

His legion of apologists, a growing constituency, have plenty of material with which to make their case. Why shouldn’t he be honoured? He’s been back working in the sport since 2014, first as a hitting instructor with the Florida Marlins and lately, in the more nebulous role of special advisor to the Giants’ CEO. Not to mention other cheats who prospered in that era remain huge figures in the game. In the space of three seasons, former New York Yankee Alex Rodriguez has gone from facing a potential lifetime ban for steroid use to becoming the voice of baseball on American television.

Then there’s the case of Bud Selig, commissioner of the major leagues during the years Bonds suddenly grew pneumatic biceps and had to order a bigger hat to cover his swelling cranium. For wilfully failing to address the steroid menace, refusing to even acknowledge there was a problem in the major leagues for the longest time, Selig had his ticket punched to the Hall of Fame. His myopia mattered a lot less because it was on his watch that fans streamed through the gates in record numbers to watch muscle-bound freaks hit stadium-shrinking long balls.

That sort of skewed morality makes a mockery of pie-eyed sentimentalists who drone on about the lyricism of America’s supposed national pastime. All that poetic guff counts for naught when the diamonds Bonds and his peers bestrode were festivals of pharmaceutical excellence and ritualistic cheating for decades.

Against that background, it’s only right to allow Giants’ fans laud Bonds one more time for all those madcap evenings when McCovey Cove was full of lunatics in kayaks waiting to snag home run balls he effortlessly arced over the walls and into the water.

Except for the obvious nagging issue. Every single ball was juiced. Every crack of the bat chemically-charged. The whole show was a massive boondoggle to allow an ageing hitter turn back his body clock so he could make a mockery of the record books. The great bat and ball swindle.

“Fans will be fans and franchises usually follow the money and do the popular thing,” wrote Patrick Saunders in the Denver Post last week. “But I do have a suggestion. Perhaps a giant syringe could be erected next to the No. 25 at AT&T Park.”

Saunders has it about right.