After back-to-back beatings against Australia, England lost to New Zealand in Wellington 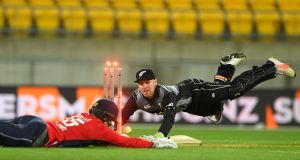 England’s Twenty20 travails continued as a third successive defeat, this time by New Zealand, left their hopes of reaching the tri-series final hanging by a thread.

After back-to-back beatings at the hands of Australia, England hoped for better luck in Wellington but fell 12 runs short of the home side’s 196 for five, leaving qualification out of their hands.

Mark Wood will curse the errant throw which spared Black Caps skipper Kane Williamson on nought — he went on to make a match-high 72 and saved much of the punishment for Wood — but the tourists were outmatched.

A revamped bowling attack, containing Wood and Liam Plunkett in place of Tom Curran and Liam Dawson, gave New Zealand all the encouragement they needed to set a steepling target.

The chase was plucky and entertaining, Alex Hales sprinting to 47 and Dawid Malan reaching 59, but it ultimately amounted to an enjoyable, doomed game of catch-up.

Both captains were injury doubts on the eve of the match but while Williamson was cleared to lead his side, Jos Buttler’s appearance at the toss confirmed Eoin Morgan had not recovered from a groin complaint.

Buttler called correctly and chose to bowl, but quickly found Martin Guptill on rambunctious form, swatting four boundaries in the space of five balls between the second and third overs.

His stay should have been over instantly, charging for a single he would never have made had Wood hit the stumps from a prime position. Instead, his throw skipped harmlessly by.

Williamson’s first job was to back up Guptill, who launched Adil Rashid for three slog-swept sixes en route to 65 from 40 balls.

The leg-spinner’s next delivery accounted for Colin de Grandhomme, but this time he had Chris Jordan’s flawless fielding to thank rather than mere good fortune.

Stationed at long-off Jordan flung one hand above his head to pluck De Grandhomme’s booming drive out of the sky, then tiptoed nimbly to avoid the boundary rope.

New Zealand took 62 from the last five, Williamson making Wood curse his earlier error even more by taking 17 off his penultimate over.

Jordan eventually parted his stumps but too much damage had been done.

Jason Roy’s short-form blues continued after the turnaround, caught off Tim Southee for eight to make it five single-figure dismissals in a row dating back to last summer.

With a stiff target on the board Hales opted for all-out aggression. After warming up the middle of his bat against Mitchell Santner and Southee he gave Trent Boult the full treatment — clubbing 20 runs from his second over.

Against expectations that saw England eclipse New Zealand’s powerplay score of 50 for one by 10 runs.

After two maximums off Boult, Hales dispatched Ish Sodhi’s wrist-spin over mid-wicket for a third. He was beginning to feel untouchable but when he went for a repeat in Sodhi’s next visit, he fell short and was comfortably held by De Grandhomme.

From there, England produced a series of shots worthy of a highlights package — Malan, James Vince and David Willey sharing five more sixes — but could not keep wickets intact.

Vince was run out by Williamson for 10, Buttler hoisted Sodhi straight to long-off and Sam Billings left no impression.

A final equation of 37 from the last three overs was theoretically achievable but when Boult toppled Jordan and Plunkett with consecutive yorkers, the issue was settled.

They finished on 184 for nine and will bow out of the series should New Zealand beat Australia on Friday or if they fail to defeat the Kiwis in Hamilton 48 hours later.