Irish crews miss out on Olympic qualification in Auckland 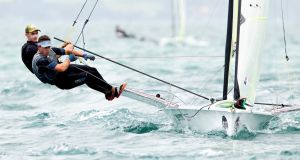 Robert Dickson and Sean Waddilove compete on the final day in Auckland.

After a 17-race series, the 49er World Championship in New Zealand ended on Sunday without an Olympic qualification for the Irish crews competing.

The lead contender ended up being the up and coming crew of Robert Dickson and Sean Waddilove who qualified for the Gold fleet last Thursday.

The Howth and Skerries pair delivered a particularly strong performance on Saturday when they recorded three top 10 race results during the finals series.

They were also on course for a race win until they were beaten on the finish line itself by New Zealand’s Peter Burling and Blair Tuke.

The Kiwi duo eventually won their fifth world title, this time on home waters to add to their Olympic medals and, in Burling’s case, an America’s Cup win.

In what may yet emerge as crucial to Irish hopes of competing at Tokyo 2020, the four nation places decided in Auckland were all taken by European teams rather than an Australian or a team from the Americas.

One more place for a European nation will be decided at the Sailing World Cup in Genoa in April 2020.

Based on the finishing-order from Auckland, Ireland would be next in line to qualify.

However, the Italian venue is notoriously flukey and both the Italian and Belgian teams as well as other European teams are also in contention.

Dickson and Waddliove eclipsed double Olympic veteran Ryan Seaton with Séafra Guilfoyle who missed a Gold fleet place after losing a three-way tie-break for 25th overall, the cut-off for the event front-runners.

However, Seaton has offset his disappointment with the expectation that more competition time will boost their results as he and Guilfoyle are happy with their boatspeed but have to work on their roles and communications on board.

Both Irish 49er will compete in the 2020 World Championships in Geelong, Australia at the start of February.