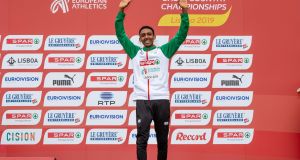 Ireland’s Efrem Gidey with his bronze medal from the Men’s U20 race at the European Cross Country Championships. Photo: Morgan Treacy/Inpho

Two shiny bronze medals, with two silver linings. Never has a European Cross Country proved more fruitful for Irish teams or individual athletes, and the striking thing about their four-medal haul in Lisbon is that it might easily have been six.

The day began with a journey completed in style, Efrem Gidey coming from running outsider to winning a bronze medal in his debut in an Irish vest – and with that setting the mood and pace for a day of unprecedented success, four years after Ireland last secured a medal on this stage.

It finished with Fionnuala McCormack coming home a close fourth in the women’s race – and whisper it, for the fourth time – before soon finding some consolation in leading the team to silver medals, also Aoibhe Richardson (17th) and Ciara Mageean (20th) giving their absolute best to secure it.

In between, and not long after Gidey stood on the medal podium in the men’s Under-20 race, his race super competitive and won by four-time defending champion Jakob Ingebrigtsen from Norway, Stephanie Cotter also finished third in the women’s under-23 race, also leading the Irish team to silver medals in the process.

The course proved exceptionally demanding, and demanded the best. Ireland had only previously won five individual medals, across all age groups, in these championships, the 26th edition proving particularly productive – and auguring well as Dublin prepares to host the event this time next year.

For a brief while the men’s under-20 team were also placed third, only for a revised count back to give that bronze medal to hosts Portugal. Both teams finished with 39 points.

For McCormack, faraway, so close once again, a bronze medal also appeared to be within her grasp for much of the 8.2km race. Yasemin Can from Turkey was the runaway winner, taking a fourth successive title, with McCormack losing out on bronze by two seconds, after leading the chase for third for much of the race, as Sweden’s Samrawit Mengsteab eventually got past her halfway around the final lap, just about holding her position on the line as McCormack chased hard and brave and without fear.

“Yeah, not the individual result I wanted, but the team one makes up for it,” said McCormack. “Not just our team, all the teams over the day. We weren’t happy that we had to go last, but it did pay off in the end, when you see other teams successful, it does drive you on.

“The Irish support was great and I just wish I could make it pay off with an individual medal, but the team does make up for it.”

Mageean described it as “probably” the toughest race of her life, collapsing over the finish line as she is prone to do in cross country. “Absolutely horrible,” is how she described the final 400m. “But to know I was fight for a silver medal for Ireland was all the ambition I needed to get across that finish line. It’s a fantastic Euro Cross for the whole Irish team.”

Gidey was also leading the chase on Ingebrigtsen, the reigning European senior 1,500m-5,000m champion, for much of the under-20 race, a quite astonishing debut for the 19 year-old, given the face he only learned for certain that he was eligible to compete in Lisbon on Friday morning.

It’s also just two years since Gidey arrived in Ireland from his native Eritrea, via a series of refugee camps including several extended months in the northern French port city of Calais, an ordeal only he can ever fully understand. From there he quickly settled into his new surrounds at Le Chéile Secondary School in Tyrellstown, west Dublin, and where his aptitude for distance running was first discovered under the careful nurturing of Joe Cooper at Clonliffe Harriers.

“Wow, I’m happy, so happy. I don’t believe it,” Gidey said after his race, passed for silver by Turkey’s Ayetullah Aslanhan on the last lap. “The first half of that race for me was so fast, I was so tired, but the second half I felt strong, for the last lap.”

The bronze medal was part of his expectation and truth not many others either: “No, I was thinking top 10. Third, that’s amazing, the European championships are so big. And to wear the Irish vest, makes me so happy, and so proud for Ireland. And so happy for my coach Joe Cooper.”

With Darragh McElhinney finishing 12th in that race, and Thomas McStay placing 24th, that briefly looked good enough to earn them team bronze, only for Portugal to get the nod by virtue of the better third place finish. Previously, it was four runners to score, and in that case Ireland would have placed second.

In the previous 25 editions of these championships, Gareth Turnbull was the only other Irish athlete to win a medal in the under-20 race, also collecting bronze back in 1998.

It’s a long way from the townland of Direen, which lies halfway between Coachford and Dripsey in east Cork, to the rarefied air of Adams State University in Colorado, but that’s where Cotter has developed her running career of late, and it showed in the way she attacked the under-23 race.

Her team mates at Adams State, Tyrone twins Eilish Flanagan and Roisin Flanagan, also completed the Irish team score just like that did when helping Adams State win the American Division 2 Cross Country last month, Eilish in ninth on this occasion, Roisin 17th, their team score of 29 second to the Netherlands (17), and ahead of Great Britain (40) in the third.

“Yeah, delighted,” said Cotter, “I knew we had a very strong team, and we were in a with a great chance of a team medal, and I knew the best way I could contribute to that was to go out in the top five, then get myself into an individual medal position. After that I knew the rest of the girls would be very close behind me.”

Victory went to Anna Emilie Moller from Denmark, who defended her title in style, only Cotter giving chase early on, before being passed by Jasmijn Lau of the Netherlands over the final lap.

“Yeah, I felt if you don’t try, you’re never going to know,” Cotter added. “I paid a bit on the third lap, when she put in a surge, and my legs were nearly dead under me. But I managed to hang on, just get passed for the silver medal in the run in. But if I hadn’t gone out hard I may not have come home with a medal at all.”

The Irish senior women scored 41 points, two less than hosts Portugal in third, with Great Britain winning on 26. Ireland also finished fourth best overall out of 21 countries that scored on the placing table, with 40 countries in all represented.