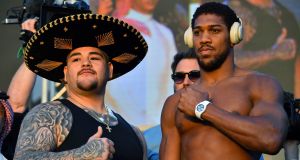 Anthony Joshua, his body again looking as if it could have been sculpted by Phidias, weighed in at his lightest since 2014 for Saturday night’s WBA, IBF and WBO heavyweight title rematch against Andy Ruiz jnr. But while a slimline Joshua tipped the scales at 16st 13lb, 10lb less than he was for the pair’s first meeting in June, Ruiz came in at a gargantuan 20st 3lb – 15lb more than six months ago when he shocked the world at Madison Square Garden.

Only the Russian Nikolai Valuev has ever weighed more for a world heavyweight title fight – and he was seven feet tall. But Joshua, who strolled to the scales looking relaxed with headphones on and chewing gum, said he is at no risk of becoming complacent despite his opponent looking out of shape.

“I feel good,” he said. “The weigh-in is important but for heavyweights it doesn’t really matter. It’s about the skills that pay the bills and that leads to victory, it’s not so much about the weight.”

When asked whether his opponent was too heavy, Joshua shook his head. “Not really, he’s a big lad. They should make a super-heavyweight division because there is that much of a vast difference. The art of the game is to hit and not get hit, avoid them punches. Imagine how being three stone heavier and everyone saying how fast he is, I’ll definitely be beating him to the punch.”

The 30-year-old Briton will earn about £60 million (€71 million) for the controversial rematch in Saudi Arabia, compared to about £13 million (€15 million) for his opponent. However Joshua’s promoter Eddie Hearn insisted money was secondary to reclaiming his belts.

“I don’t know if he has wanted it so bad before,” said Hearn. “When he lost he wasn’t in a great place for weeks after. But he’s really got his head screwed on. It’s ‘I’ve got to win this fight’ not just ‘It’s a lot of money and I’ve got to take it’.”

Hearn also warned it would be wrong to assume Joshua had lost weight to keep the fight at a distance. “He feels amazing, he is punching faster and sharper than he has ever done before,” he said. “There is no intention to box for 12 rounds. He will box Ruiz and be smart, but he also wants to punish him and hurt him when he gets the opportunity to do so. You are going to see a vicious performance.”

The promoter again defended the decision to take the fight to Saudi Arabia, despite growing criticism from human rights organisations including Amnesty International. “It has just been the most amazing experience I have ever been involved with,” Hearn said. “People say, what does Saudi know about boxing? They have TVs. They have the internet. They watch sport. And they are very tech-savvy and young.”