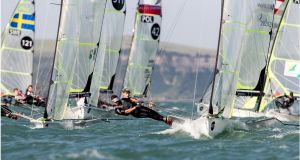 In a disappointing twist to the 49er World Championship for double-Olympic veteran Ryan Seaton with crew Séafra Guilfoyle the pair missed a Gold fleet place after losing a three-way tie-break for 25th overall.

However, world under-23 bronze medalists Robert Dickson and Sean Waddilove improved their overall position to 20th place and made the cut for the final round Gold fleet of the top 25 boats.

The Howth and Skerries duo are now Ireland’s best chance of qualifying for the Tokyo Olympics and are one of seven nations chasing four places that will be awarded this week.

A final nation place will be decided in April 2020 in Genoa.

Seaton and Guilfoyle had been in 19th place overall going into the final day of qualifying racing and opened well with a sixth place.

But this was followed by an 18th and in the final race appeared to start well in the top ten boats before a mark rounding incident saw the Ballyholme and Crosshaven pair take a penalty turn.

They dropped ten places as a result to 18th and into the three-way tie.