Serena Williams has her say on Australian Open quarantine

Williams travelled to Australia with her three year-old daughter Olympia 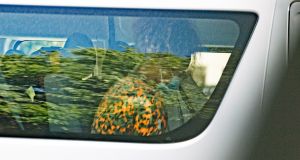 Serena Williams arrives back to The M Suites accomodation, where some Australian Open competitors are currently under quarantine. Photograph: EPA

In an interview with late night US TV host Stephen Colbert the 23-time grand slam champion said Australia was “doing it right” when it came to border controls.

“Yeah, it’s super, super strict but it’s really good. So Australia right now has, the last I heard, they had zero cases of Covid,” she said, eliciting a “wow” from Colbert.

“Unbelievable, right? The whole country. So that is really amazing.

“So when we come here in Australia, everyone has to quarantine in a room for 14 days and it’s insane and it’s super intense but it’s super good because after that you can have a new normal like we were used to last year this time in the United States.”

Williams is quarantining in Adelaide ahead of the year’s first grand slam, which begins in Melbourne on February 8th. She is one of 1,200 people isolating for two weeks in a number of hotels in order to create a “bubble” and allow the tournament to go ahead, notionally without the risk of an outbreak.

“It’s definitely hard with the three-year-old to be in the hotel all day, but it’s worth it because you want everyone to be safe at the end of the day,” she said.

Williams travelled to Australia with her daughter Olympia.

This comes after a number of other players among the 72 that travelled on planes later found to have positive Covid-19 cases on board complained at length about the quarantine protocols, . These players were sent into “hard quarantine” for two weeks, unable to leave their rooms for the promised five hours of training each day.

Spanish world No 13 Roberto Bautista Agut described conditions as like prison “but with wifi”, while his compatriot, the women’s world No 67 Paula Badosa, said the situation was “lamentable” and that she felt abandoned by tournament organisers.

World No 1 Novak Djokovic reportedly issued a list of demands to Australian Open organisers on behalf of players in lockdown, including requests for a reduced number of quarantining days and to be moved to private houses with tennis courts. These were promptly rejected by the Victorian premier Daniel Andrews.

The majority of those in lockdown have only a few days remaining before they are able to train with others ahead of the start of the tournament in just over a week. - Guardian