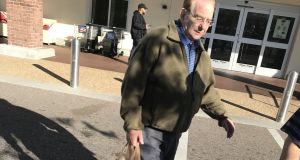 George Gibney photographed in 2019 close to his home near Orlando in Florida. Photograph: Mark Horgan

The most recent photograph taken of the notorious former Irish Olympic swimming coach George Gibney has been released by the producers of the Where is George Gibney? podcast series, a co-production between Second Captains and BBC Sounds.

Gibney, who avoided trial in Ireland in 1994 on 27 accounts of rape and sexual abuse against young male and female swimmers, fled the country to Scotland and then the USA, where he now lives, having acquired an immigrant visa prior to the charges. It is understood he received the visa in 1992.

The picture by one of the series makers, Mark Horgan, was taken to confirm Gibney’s identity during the production of the podcast. The location is close to Gibney’s current home in Altamonte Springs, near Orlando, Florida.

Horgan and a colleague from the series, Ciarán Cassidy, confronted Gibney later in the making of the series but he remained silent, refusing to answer any questions regarding allegations of sexual assault against children. Gibney (72) has not made any comment to the media since the original charges were dismissed almost 25 years ago.

Following the airing of the 10-part podcast, which began in August last year and was listened to by an audience of almost two million, 18 people made contact with the makers with two women making new complaints to the Garda of sexual assault while they were young swimmers.

The Garda last month confirmed that they were looking into fresh allegations against Gibney. The former coach cannot be charged again with any of the complaints that were dismissed in 1994.

Gibney’s story was recently picked up for the first time in the New York Times on January 18th with the photograph accompanying the article taken in the 1980s, while he was still in charge of the Irish Olympic swimming team. The New York Times is the first mainstream media outlet in the USA to take an interest in the case of the former coach.

While he is not currently involved with coaching young children, on arrival in the US Gibney did work at a swimming pool in Arvada, Colorado before moving on to California and finally Florida.

Gibney attempted in 2010 to obtain US citizenship. The effort failed, however, when he was asked on the application to produce records relating to any past criminal proceedings taken against him even if they were dismissed.