Mason Jones not interested in being the Welsh Conor McGregor 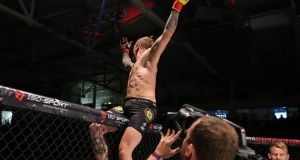 Mason Jones of Wales is set to make his UFC debut this week. Photograph: Getty Images

Mason Jones may have been the first fighter since Conor McGregor to hold two Cage Warriors world titles simultaneously but the proud Welshman insists he lives in nobody’s shadow as he prepares for his UFC debut.

In beating Adam Proctor last September to add the welterweight crown to his lightweight title in Europe’s longest-running mixed martial arts promotion, Jones emulated someone who many believe went on to revolutionise the UFC.

Jones has charm and self-confidence, believing himself to possess an “indestructible” mindset ahead of facing Mike Davis at Fight Island in Abu Dhabi on Wednesday, having won all 10 of his MMA contests to date.

But while he has great admiration for what McGregor has achieved, Jones wants to establish his own legacy: “I’m not out to copy anyone, I’m not an imitator, I’m as original as I am.

“I see what he’s done as something to aspire to. Whether you love him or hate him, he’s very good in his business sense. We all want to be successful and be involved in these money fights.

“I don’t expect it to be an easy route or that cut and dry, I understand there will be high points and low points. I understand everyone on this planet is beatable but I am indestructible in my mindset. I’m just going to go out there and show everyone what a Welsh Dragon can do.”

While amplifying his own expectations, Jones is respectful and wary of an American opponent whose only two defeats in 10 fights have come against high-quality opposition in Sodiq Yusuff and Gilbert Burns.

Jones said: “I’m a zero-zero-zero fighter (in the UFC) going into this, this is my debut and me starting afresh and getting ready to go. There is no pressure coming in, I’m just going to do the best performance I can.

“This is what I was born and bred to do, I know everyone says that but I’ve been training since I was seven years of age towards this goal and I’ve perfected as much as I can to this point.

“He just doesn’t love the sport the way I do, he’s not as hungry for it the way I am. I’m ready to die in there, if I need to make that choice then I’m going until I can’t anymore. I’ll sacrifice everything in there for this.”