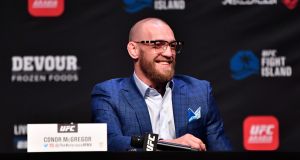 Conor McGregor was beaten in the second round on his latest return to the Octagon. Photograph: Jeff Bottari/Getty

During the build-up to Conor McGregor’s defeat by Dustin Poirier last week, ESPN did its utmost to convince those interested in buying the bout on its pay-per-view platform that the Dubliner was still a man to root for. Aside from nauseating soft-ball interviews, Ariel Helwani, the network’s go-to UFC guy, also described him on another show as “a beacon of light” to the Irish people during the pandemic, an individual dramatically changed by fatherhood. The hard sell of a desperate outfit that has gambled $1.5bn on broadcast rights to the sport. The same old false narrative.

McGregor’s first child was born in May, 2017. Since that landmark event, he has violently attacked a bus full of fellow fighters in Brooklyn, smashed up the mobile phone of a fan outside a hotel in Miami, and punched an old man in the face for refusing a complimentary glass of his gut-rot whiskey. Those civil lawsuits filed in Dublin last week, the ones reported on in such troubling, lurid detail by the New York Times (taking full advantage of America’s less restrictive libel laws), they stem from an incident in 2018. Parenting really did seem to transform him alright.

This kind of shameless guff has been a problem with McGregor and the American media since Fox Sports (then owners of the television rights to the octagon) laughably tried to style him the Irish Muhammad Ali. One fought for civil rights, the other is repeatedly read his Miranda rights.

With too much to lose if even a smidgen of the allegations against him are true, those with a stake in UFC continue to promulgate the myth of the noble, working-class warrior made good, the sharply-dressed version of Notre Dame’s fighting leprechaun made flesh, the darling of all Ireland. Two decades ago, ESPN covered Barry Bonds’ chemically-enhanced assault on baseball’s records book as if the only juice he ever took was with his breakfast in the morning. They have previous for this kind of convenient commercial ignorance.

McGregor is no slouch in trying to control the story either. When he appeared on the Jimmy Fallon Show from Paddy Reilly’s pub in Manhattan a while back, eagle-eyed viewers might have spotted a well-dressed, middle-aged woman lurking in the background. No ordinary customer. That was Karen J Kessler, the leading celebrity crisis manager in America. Initially drafted into the camp following his arrest in Brooklyn, you may have seen her name featuring in his rather corporate response to his most recent legal troubles in Dublin.

When you have the most renowned damage control expert in Hollywood on retainer, this may be a sign you have more in common with Johnny Depp than Johnny Sexton. It is also an indicator of a willingness to throw serious money at trying to protect your brand and an awareness of the misbehaviour that requires you to do so. Even if his days as an elite mixed martial artist look numbered, his ability to cash in on his fame remains very much intact, at least until his myopic, sophomoric fan base finally (if ever) take notice of the gravity of the recurring accusations against him.

For now, the Maclifers remain so committed to the cult that AugustMcGregor, his clothing brand, can somehow charge $104 for a hooded sweatshirt bearing an image of his distinctive ring walk called “Billionaire Strut”. Just $20 more gets you “The Whoop Ass” embroidered hoodie. Those wanting to train like their “hero” can also purchase the McGregor FAST app for $99 and soon will be able to splurge on branded protein from that outfit too. And these ancillary enterprises are dwarfed by the immense commercial potential of Proper 12.

All of this explains why so many inexplicably remain in McGregor’s corner when the decent thing to do would be to walk, no, run away. It’s all about money. Always. Dana White has been so tolerant of the, ahem, “incidents” in various countries because UFC doesn’t have anybody else capable of working the talk show circuit, whipping up interest beyond the hardcore support, a necessity for the sport to grow.

White knows too that the casual fans will just as easily spend their pay-per-view dollars watching the Irishman don gloves to fight an over the hill Manny Pacquiao or any of the random YouTubers currently polluting boxing rings. These freakshows sell well, his bout with Mayweather drew three times as many buys as his loss to Poirier, and McGregor’s disgusting, extra-curricular antics fit right in with that sordid, ever-expanding corner of the warped sports entertainment universe.

We may also have reached a frightening point as a society where delinquency no longer impacts on popularity or marketability. Mike Tyson, the convicted rapist, became the star of a warm-hearted animated television series in which he solves mysteries a la Scooby Doo. Seventy-four million Americans recently tried to re-elect a president who boasted of sexually assaulting women. Against that background, it’s hardly surprising that plenty are still willing to follow McGregor no matter the noxious trail he constantly leaves in his wake.

“Fame requires every kind of excess,” wrote Don DeLillo in his novel, Great Jones Street. “I mean true fame… this special kind, feeds itself on outrage, on what the counsellors of lesser men would consider bad publicity-hysteria in limousines, knife fights in the audience, bizarre litigation, treachery, pandemonium….”

DeLillo came up with that almost 50 years ago. Saw this coming.