Talk of athletes getting Covid-19 vaccines early is growing louder

Olympics taking place with vaccinated athletes appears to be a possibility 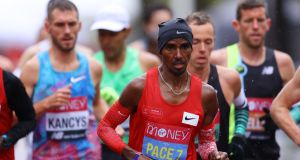 Mo Farah said on Tuesday that athletes have been told they will be vaccinated before the Olympics. Photo: Richard Heathcote/Getty Images

Unlikely as it may be to hear any athlete or player, elite or amateur, suggest they get a head start in Covid-19 vaccinations at this point in time – even if that meant competing at the Tokyo Olympics come July – it appears that race has already started.

The World Health Organisation (WHO) has just had their say on the matter, Dr Michael Ryan, the Sligo native and executive director of the WHO’s Health Emergencies Program, telling a press conference in Geneva they remain “laser-focused” on vaccinating health workers and the vulnerable.

“We face a crisis now on a global scale, that requires frontline health workers, those older people and those most vulnerable in our societies to access vaccine first,” said Ryan. “That doesn’t in any way negate the desire or the will to have the Olympics and come together and celebrate a wonderful global sporting event, where all countries come together to share that. What a wonderful symbol those Games are for our shared humanity.

“However, we have to face the realities of what we face now: There is not enough vaccine, right now, to even serve those who are most at risk.”

The International Olympic Committee (IOC) have effectively been following this lead, IOC president Thomas Bach saying the first doses should be reserved for health care workers and other vulnerable groups, although long-time IOC member Dick Pound said earlier this month that mass vaccination of Olympic athletes should be an option and “the most realistic way of (the Games) going ahead.”

On Tuesday, Mo Farah appeared to claim that vaccinating athletes was a real possibility when he told talkSPORT that, “the key thing is to stay safe and see what the country can do. What they have said to us is basically everyone will be able to get Covid injections and after that it’s less risk of spreading the disease, and then from there just see what happens and take one day at a time.

“I think (the Games) will go ahead but at the same time, for me I have had the experience of taking part in three Olympics and I have to see it as another race and see what happens.”

Others, including French Olympic president Denis Masseglia said un-vaccinated athletes would find things “extremely difficult” in Tokyo, and “between now and the Games we can think that there is the possibility of having them vaccinated without this penalising other people”.

Closer to home, while select elite team sports are continuing within their own bubble, the GAA have no intention of seeking a head start in vaccination even if it meant speeding up the return to their intercounty season. “We’re certainly not going there,” said Alan Milton, the GAA’s director of communications. “If the Government at some point wants to start that conversation with us, but we won’t be making any sort of case at this point in time, when there are still a lot of people out there who are badly in need of the vaccine, and should continue to be prioritised. It’s certainly not one for us to make a case for.”

Last week, Minister for Health Stephen Donnelly told the Dáil the Government intends to ensure every resident in Ireland will receive the Covid-19 vaccine by September. In the English Premier League, Burnley manager Sean Dyche did make a case for players to be “fast-tracked” for the vaccine, with the money saved on testing given to the NHS, although that hasn’t yet gained any formal support.

Several Irish athletes have also spoken on the matter, all agreeing it was hard to present any case for a head start in the vaccine at this point: “Obviously there are more vulnerable people that are high up on the risk before athletes are ever considered,” said Phil Healy, the Irish sprinter currently on course for Tokyo under the ranking qualifications.

“It’s so important for them to get it first but with the different vaccines coming on to the market, the numbers that are available, obviously things will change in Ireland and it being possibly rolled out in pharmacies.”

In the meantime Healy isn’t chancing any races abroad, even if that means going to the European Indoors in Poland in March without being properly tested: “There’s a massive risk versus reward with me travelling. You can go abroad, you can get your standard, but you can also pick it (Covid) up at the airport, in the plane, and you could mess up your next few weeks and months afterwards because you hear the horror stories. Just because you’re fit and healthy doesn’t mean you’re not going to have the effects of it.”

Earlier this month, however, the UAE Team Emirates cycling team, which includes Tour de France winner Tadej Pogacar, did receive the vaccine during their pre-season training camp in the United Arab Emirates, getting the Chinese Sinopharm vaccine, which underwent trials in the UAE in the final months of 2020.

UAE Team Emirates manager Mauro Gianetti offered to be part of the final trial Sinopharm trials in the UAE, which means the team may already be at an advantage in facilitating their travel and racing for 2021. The first date on the 2021 UCI world calendar also now happens to be the UAE Tour, scheduled for February 21st-27th, where Ireland’s Sam Bennett is among those set to open their season.

Dan Martin’s Israel Start-Up Nation team may also get a sort of head start on their rivals, in part because of the speedy rol out of the vaccine in Israel. Co-owner Sylvan Adams indicated his riders could receive doses of the vaccine when they head to Israel for a second training camp in March: “They’re saying that by the end of March every person in Israel will have received a second dose so we’ll basically have gotten herd immunity,” Adams said. “We’re not going to jump the queue, (but) if there are vaccines available, it may be possible to consider vaccinating our riders.”