Teaching was Jerry Kiernan’s vocation; in 30 years he never missed a day 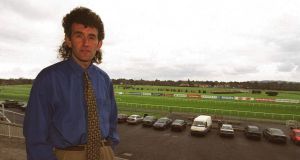 Jerry Kiernan was a maverick. The curriculum didn’t always suit him, so he would often go off-piste. Photograph: Brendan Moran/Sportsfile

The Irish sporting world was shocked on Thursday to learn of the death of Jerry Kiernan, who died at the age of 67. His many achievements as an athlete, coach and television analyst have been acclaimed by journalists and sports stars over the last few days. Jerry had many talents. Who else in Irish sport has run a sub-four-minute mile, finished in the top 10 in an Olympic marathon, coached many of our top runners and also offered insightful, honest analysis on athletics for the last two decades?

But Jerry had another, less public talent. For more than 30 years, he worked as a primary school teacher in St Brigid’s Boys School in south Dublin, and it was there that I first met him. It was the mid-1990s then, and his best days as an athlete were behind him. He was tall and rake thin with barely tamed, curly black hair. At that time he taught sixth class, so you wouldn’t have much to do with him until you were in fourth, and he was staging trials to pick the fastest runners to go to Santry Stadium in the summer to compete.

As schoolboys, we were vaguely aware of his past achievements, but we would have known him better at that time for the encouragement and advice which he would impart in hushed tones before a race. We couldn’t comprehend that he had run 2.12 for the marathon – roughly the equivalent to running a sub-16-minute 5km, eight times, back to back, in the heat of a Los Angeles summer.

Teaching was a vocation to Jerry, something he took very seriously. In more than 30 years he never missed a day through sickness. Anyone who passed through his classroom will attest that he was a brilliant teacher. He was obsessed with words. I remember him saying that when he packed a bag for his holidays, the first thing he put into it was always a dictionary – before even his running shoes. Two of the words I picked up in his class were “oscillate” and “bastinadoed”– and I have never forgotten them. He had a genuine passion for teaching, making everything interesting and compelling you to learn.

Jerry was a maverick. The curriculum didn’t always suit him, so he would often go off-piste. For geography, he expounded on the Aegean and Adriatic seas, drawing in Greek mythology to bring imagery and drama to the lesson. He taught us bits of Greek and Latin so that we would better understand the etymology of words, and threw in some Italian along the way. He was always buying us bananas and kiwis, imploring us to eat these “super foods” before that term was ever known.

For homework, he would task us with finding out the meaning of a difficult word, and if you were successful, he would give you a T-shirt he had won the previous weekend at a road race or track meet. Once we had to find out what the antonym for “orient” is. In the days before the internet, it was pretty hard for a 12- year-old to figure out that it is “occident”, but about half a dozen boys came back with the correct answer. We all wanted that T-shirt.

After we had moved on to secondary school, we were welcome to call around to his house and he would happily give grinds to any of his past pupils who asked him for help – Irish on a Wednesday and maths on a Saturday morning before he went off training. Just like the athletes he coached, he never asked for a penny.

I got to know Jerry again in my 20s, when I was part of his training group in Belfield, a mixture of Ireland’s most elite athletes and those of us who just wanted to run. Jerry had time for everyone, giving out training plans and sage advice to anyone who turned up. I asked him once how school was going; he told me he was teaching his class about South Ossetia, the linguistic ties the region had with Russia and the background of the war that had recently broken out in the Caucuses. This was not in any textbook, but he thought it was important that people understood the history of the conflict.

Many great coaches have a background in teaching; Joe Schmidt and Brian Cody are two such examples. Success in both fields requires some of the same attributes: effective communication, empathy, knowledge and experience. Jerry had all of these, and he imparted his wisdom freely to all who came looking for it. While Jerry should rightly be remembered for his contribution to Irish sport, he will also be remembered by all the children who he taught, nurtured and inspired.

If you ever come across someone who went to St Brigid’s, Cornelscourt, ask them who the best teacher they ever had was. Ten out of ten will say Mr Kiernan.