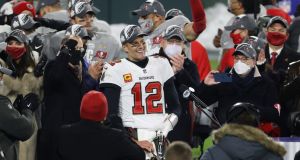 Tom Brady of the Tampa Bay Buccaneers celebrates after their win over the Green Bay Packers during the NFC Championship game at Lambeau Field in Green Bay, Wisconsin. Photo: Dylan Buell/Getty Images

Tom Brady’s first season with the Tampa Bay Buccaneers will end similarly to how many of his campaigns with the New England Patriots finished – with his team in the Super Bowl.

Brady passed for three touchdowns and will be returning to the Super Bowl for the 10th time after helping the visiting Tampa Bay Buccaneers defeat the top-seeded Green Bay Packers 31-26 in the NFC Championship Game on Sunday afternoon.

It is exactly the type of season finale the 43-year-old Brady was hoping for when he traded in cold New England winters for Florida sun.

“It’s been a long process for the whole team,” Brady said during the postgame trophy ceremony. “Today was a great team effort. We played sporadically a little bit, but the defense came up huge. We’re going to need it again in a couple weeks. I know it’s a big game coming up.”

The Buccaneers will become the first team to play a Super Bowl in their home stadium with the game set for February 7th in Tampa, Florida where they will face the Kansas City Chiefs after they saw off the Buffalo Bills.

“We knew it was time for us to affect the game and we knew we could because Aaron Rodgers holds the ball and wants to make the big plays,” Barrett said. “We just took advantage of the opportunities.”

Brady completed 20 of 36 passes for 280 yards and survived three second-half interceptions as the fifth-seeded Buccaneers built a 17-point lead en route to reaching the Super Bowl for the second time in franchise history. Tampa Bay also reached the big game in the 2002 season and walloped the then-Oakland Raiders 48-21 for its only Super Bowl title.

Rodgers completed 33 of 48 passes for 346 yards, three touchdowns and one interception for the Packers. Davante Adams, Marquez Valdes-Scantling and Robert Tonyan caught touchdown passes and Jaire Alexander had two interceptions.

“I’m pretty gutted,” Rodgers said. “To get to this point – we had our chances. They went up three scores and we battled back. We had a lot of chances.”

Green Bay reached the Tampa Bay 8-yard line late in the game but questionably settled for Mason Crosby’s 26-yard field goal with 2:05 left to move within five points. The Buccaneers got the ball back and picked up three first downs while running out the clock.

Packers coach Matt LaFleur said he felt going for the field goal was the right call.

“Anytime it doesn’t work out, you always regret it,” LaFleur said. “The circumstances of having three shots and coming away with no yards and knowing you not only need the touchdown but the two-point conversion.

“I was looking at it that we have four timeouts with the two-minute warning. It didn’t work out.”

Said Rodgers: “I was thinking we were going to have four chances (of scoring). ... That decision was made, and we moved on.”

Brady improved to 10-4 in conference championship games, while Rodgers dropped his fourth straight to fall to 1-4. The Packers have lost in the NFC title game in each of the past two seasons.

“This one does sting,” LaFleur said. “It will take a long time to get over this one.”

Green Bay experienced a devastating sequence over the final 34 seconds of the first half to trail 21-10 at the break.

The Packers were down four and facing second-and-18 from their own 32-yard line when Rodgers was intercepted by Sean Murphy-Bunting.

The turnover became costly when Miller sped past Green Bay’s Kevin King and Brady connected with him from 39 yards out with one second left to account for the 11-point halftime advantage.

“That was an awesome play,” Miller said. “The coaches made an awesome decision going for it.”

More misfortune occurred on the Packers’ initial possession of the third quarter. Aaron Jones caught a short pass, but Whitehead dislodged the ball at the Green Bay 32 and White recovered it at the 29 and ran 21 yards to the eight.

On the ensuing play, Brady tossed an eight-yard scoring pass to Brate to make it 28-10 just 66 seconds into the second half.

Rodgers threw an eight-yard scoring pass to Tonyan with 9:28 left to cut the Tampa Bay lead to 11. Adrian Amos then intercepted Brady and the Packers cashed in with Rodgers hitting Adams on a two-yard scoring pass to pull within 28-23 with 24 seconds left in the stanza.

The Buccaneers started strong by taking the opening kickoff 66 yards on nine plays with Brady tossing a 15-yard scoring pass to Evans. Green Bay tied the score in the opening minute of the second quarter when Rodgers threw a 50-yard touchdown pass to Valdes-Scantling.

Since the beginning of the season, the Kansas City Chiefs have had one goal they turned into a catchphrase after winning last year’s Super Bowl: Run it back.

Patrick Mahomes got to state that objective again Sunday after the Kansas City Chiefs repeated as AFC champions by downing the Buffalo Bills 38-24 at Kansas City, Mo.

“The job’s not finished,” said Mahomes, after passing for 325 yards and three touchdowns. “We’re going to Tampa to try to run it back.”

After getting cleared from concussion protocol Friday, Mahomes still played with turf toe on his left foot but completed 29 of 38 attempts as the Chiefs gained an opportunity for a title defense.

Kansas City will attempt to become the first back-to-back NFL champion since the 2003-04 seasons (New England Patriots) when they meets the Buccaneers on February 7th.

“We’ve just got to be ourselves,” Mahomes said during the postgame trophy presentation. “I trust my guys over anybody to go out there and be ourselves.”

Chiefs coach Andy Reid was even more on point about his team’s quest.

“We’ve got the Lamar Hunt Trophy again in Kansas City,” Reid said of the AFC championship prize named after the Chiefs founder. “Now we’ve got to go get the big one and bring home the gold.”

The Chiefs went three-and-out on their opening possession, then overturned a 9-0 deficit with second-quarter touchdown drives of 80, 82 and 77 yards.

Taking away a one-play kneel down to end the first half, Kansas City scored on six straight possessions while going 5-for-5 on touchdowns in the red zone.

Tyreek Hill raced 172 yards on nine receptions, including a 71-yard gain. Travis Kelce added 13 catches (a record for a conference championship game) for 118 yards and two scores. The Chiefs amassed 439 yards but may not have left tackle Eric Fisher for the Super Bowl after their left tackle suffered an Achilles injury.

Buffalo’s Josh Allen completed 28 of 48 passes for 287 yards and two touchdowns, while rushing for 88 yards, but fourth-quarter interceptions by Rashad Fenton and Bashaud Breeland (on a two-point conversion attempt) proved disastrous.

“This is a learning experience,” Bills coach Sean McDermott said. “Tough environment to play. We didn’t play our best game; we didn’t coach our best game. We’ll be back.”

The game ended with chippy altercations that drew offsetting penalties.

The Bills converted Taiwan Jones’ recovery of a muffed punt by Mecole Hardman into a three-yard touchdown pass from Allen to Dawson Knox for their 9-0 lead.

The Chiefs recovered to build a 21-12 halftime margin as Hardman atoned for his mishandled punt. He grabbed a three-yard touchdown from Mahomes with 14:16 left in the half before beginning Kansas City’s next drive with a 50-yard end around.

The Chiefs tacked on touchdown runs of six and one yards from Darrel Williams and Clyde Edwards-Helaire, respectively, for a 21-9 lead.