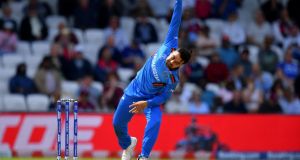 Rashid Khan starred with bat and ball as Afghanistan completed a clean sweep of victories in their one-day international series against Ireland, who fell to a 36-run defeat despite another century from Paul Stirling.

Afghanistan had moved into an unassailable 2-0 lead but the World Cup Super League points on offer gave Ireland something to play for in this Abu Dhabi dead rubber and they restricted their opponents to 266 for nine.

Craig Young and Simi Singh each took three wickets while Andy McBrine yielded just 22 runs from his 10 overs but Afghanistan were let off the hook, having slipped to 163 for seven when Rashid walked out to bat.

He bolstered the total with some lusty blows, top-scoring with 48 from 40 balls, before taking centre stage with his leg-spin, snaring young middle-order trio Harry Tector, Curtis Campher and Lorcan Tucker.

Stirling followed up his 128 on Sunday with 118 but he lacked support, with Tector’s 24 the next highest score from an Ireland batsman. Once Stirling was bowled by Mujeeb Ur Rahman, Ireland’s hopes dramatically diminished.

They needed 65 from the final 10 overs with three wickets remaining but the lower order was subdued and Rashid finished with four for 29 when Young was bowled through the gate as Ireland were all out for 230 after 47.1 overs.